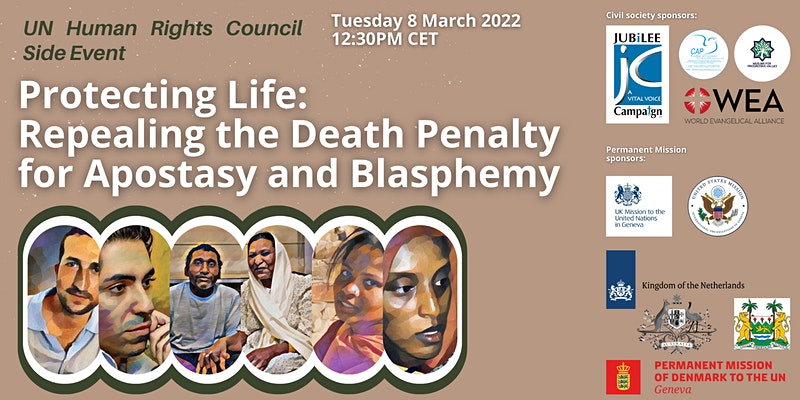 WASHINGTON, D.C 25 March 2022 – The first Human Rights Council hybrid event since COVID-19 brought high-level and grassroot advocates and initiatives from the four corners of the globe united in bringing an end to the death penalty for apostasy and blasphemy.

Dr. Ibrahim Salama Chief of the Human Rights Treaties Branch of UNOHCHR and instrumental in the Faith for Rights Framework, shared in his remarks.

Executive Director of Jubilee Campaign, Ann Buwalda Esq, who co-Chaired the event opened with a call to action, “We must push for language to be embedded in international human rights documentation on the death penalty and extrajudicial killings so that people never again be sentenced to death for their faith and peaceful manifestations thereof. This is a prime example of a punishment that is absolutely disproportionate to the alleged crime.”

The side-event, co-sponsored by six different States [Australia, Chile, Denmark, the Netherlands, the United Kingdom and the United States] and four diverse NGOs [Jubilee Campaign, Muslims for Progressive Values, CAP Liberté de Conscience and WEA], provided a robust discussion lifting the urgency of the repeal. Chaired skilfully by Ambassador Douma and hosted at the Dutch Mission to the UN in Geneva, with an in-person panel of the newly appointed Australian representative to the International Religious Freedom or Belief Alliance (IRFBA), Ambassador Chiaro Porro, the UN Special Rapporteur on freedom of religion or belief Dr. Ahmed Shaheed and Dan Nadel, Director of the Office on International Religious Freedom, the event provided a launch pad for actions to repeal the death penalty for apostasy and blasphemy.

At the heart of the event and discussion was Eleos Justice Monash University report Killing in the Name of God, presented by Dr. Mai Sato which reviews the 12 countries which maintain the death penalty for apostasy and blasphemy doing a deep-dive on Pakistan and Afghanistan. “The idea that the sacred means forceful protection, and in some cases to the extent of lethal violence, is created or at the very least legitimized in these societies by the presence of the death penalty for religious offences,” Dr. Sato shared. She also noted that there are other forms of state-sanctioned killings beyond the death penalty motivated by alleged religious offending or by religious identity.

Two UN experts were present, including UN Special Rapporteur Shaheed who has been monumental in work to repeal anti-apostasy and anti-blasphemy laws, he raised the importance of the repeal these laws recalling his March 2019 report recommendation of a triage-based approach of addressing the application of the laws with the most serious penalties, including the death penalty, “to focus on those immediate concerns that affect life and limb.” He shared how anti-apostasy and anti-blasphemy laws, “even where the governments are not trying to implement them [anti-apostasy and anti-blasphemy laws] they empower people to take the laws into their own hands and these circumstances can become ungovernable.” He emphasised that it is in the interest of everybody “to repeal these laws as quickly as possible and completely.”

The event garnered global engagement and attendance, as noted by Ambassador Douma during the session, following Professor Masud’s summary, “it’s in a way a preview to our next phase, how to handle this in the international scene the fact that we are all sitting here together from so many parts of the world.”

Mr. Morris Tidball-Binz, the UN Special Rapporteur on extrajudicial killings emphasised that the imposition of the death penalty for apostasy and blasphemy amounts to an “arbitrary deprivation of life and a blatant violation of international human rights law, which in-equivocally prohibits the imposition of the death penalty for such cases.” He also praised the “thoroughly researched and scholarly” Eleos Justice report Killing the Name of God, as “a truly invaluable toolbox for lawmakers and activists.”

The inclusion of first-hand experiences by Mariam Ibraheem, herself, a survivor of the apostasy law in Sudan, and attorney Kola Alapinni, representing Sufi singer Yahaya Aminu-Sharif who was imprisoned by Nigerian authorities since March 2020 on charges of blasphemy and previously sentenced to death; brought into perspective the reality on the ground. Mariam Ibraheem shared her personal story of how the court sentenced her to death for apostasy and 100 lashes for adultery when she married a Christian man, and how the court relied on religious leaders to advise on the sentence. Kola Alapinni described how the sharia law entered Nigeria’s penal code and shared about the difficulties in getting the appeal of the death sentence against Mr. Sharif heard. He also described the discriminatory practice of the blasphemy laws, “Shariah law in Nigeria basically catches the poor people, and the defenceless people.”

There were several high-level interventions, in addition to the panel in Geneva, including United States Commission on International Religious Freedom (USCIRF) Chair Maenza and Special Envoy on Freedom of Religion or Belief Fiona Bruce MP who is also the acting Chair for IRFBA in 2022, “I’m very pleased that today’s event has been directly inspired by a Working Group on the Death Penalty set up under the auspices of the Alliance and chaired Australia.” She emphasised that, “advocacy and co-ordination among the like-minded are not enough.” She drew from the Killing in the Name of God on practical steps to make the repeal a reality including, engaging international media, training for the legal profession and strategies for advocacy.

“Today’s was a worldwide issue, and this needs to be a worldwide initiative,” Ambassador Douma concluded and made a call to action raised by both Jubilee Campaign Executive Director Ann Buwalda and Dr.Salama, “We have two resolutions and the United Nations framework a resolution on the death penalty and a resolution on extrajudicial killings, two separate processes […] we need to find a way to use those two resolutions […] There’s work to be done. Let’s get to work.”

Already the side-event has had an impact with the EU intergroup on freedom of religion or belief working on submitting a resolution to ask the EU Council and Commission to support language concerning blasphemy and apostasy to be inserted in the resolution on the death penalty. The International Religious Freedom Summit Working Group on Repealing the Death Penalty for Apostasy and Blasphemy, is also organising a webinar for the US congress building on the recommendations made on the 8th March 2022.

Dan Nadel Director of the Office of International Religious Freedom

Protecting Life: Repealing the Death Penalty for Apostasy and Blasphemy