Abusive Taxation and Denial of Justice in Taiwan: The Case of Tai Ji Men A case of arbitrary taxation of individual gifts 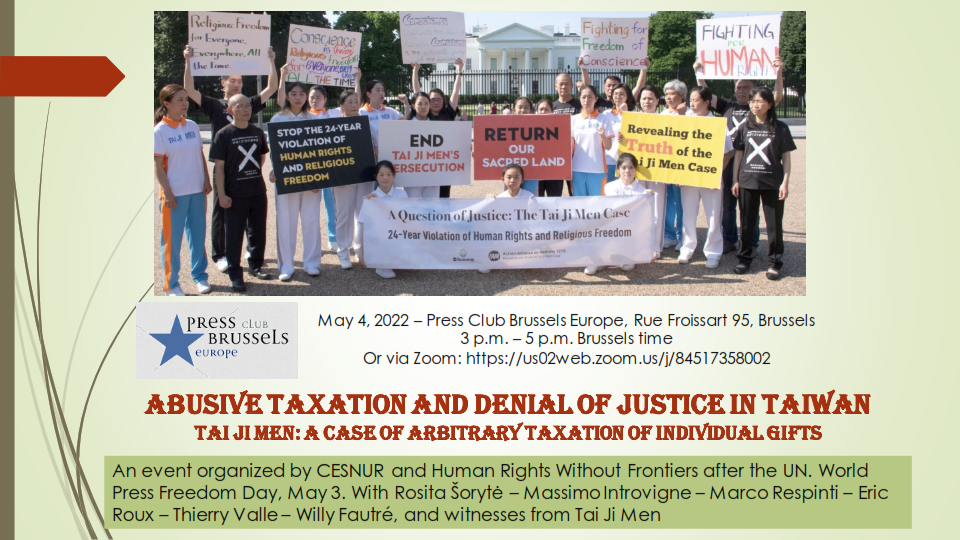 Conference at the Press Club in Brussels on 4 May, 3pm – 5pm

Tai Ji Men is a menpai (similar to school) of qigong, martial arts, and self-cultivation, and its shifu (master) and dizi (disciple) have long been committed to international cultural exchanges, spreading the concepts of love, peace, and conscience, purifying people’s hearts, and practicing world peace. It has been highly praised by Taiwanese presidents, vice presidents, and foreign ministers.

Since its inception in 1966, Tai Ji Men Qigong Academy has never had any tax problem; however, in 1996, it was persecuted during a political purge in the name of a religious crackdown. Prosecutor Hou Kuan-jen fabricated witnesses and evidence to falsely accuse Tai Ji Men of fraud and tax evasion. Shih Yueh-sheng, the witness who cooperated with the prosecution and committed perjury, revealed before his death that the case was led by Hou Kuan-jen and that he was asked to testify at the time only for formality. This proves that the Tai Ji Men case was fabricated and framed from the very beginning, and the subsequent criminal prosecution, heavy taxes and penalties, as well as compulsory enforcement were all serious violations of Taiwan’s constitution, human rights, the Universal Declaration of Human Rights, the ICCPR, and the ICESCR, causing serious harm to Taiwan and its people.

CPR – International Covenant on Civil and Political Rights 133 Session : Freedom of expression under threat in Ukraine the case of Anatoliy Sharij