CAP Freedom of Conscience joined a coalition of NGO to demand the release of Dr. Gulshan Abbas. 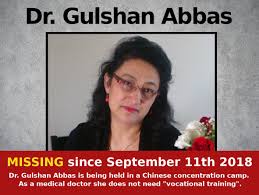 The Coalition to Advance Religious Freedom in China decries the unjust imprisonment of Dr. Gulshan Abbas who was sentenced to 20 years in prison for actions that the Chinese government falsely labeled as terrorism-related. As a diverse group of NGOs united to promote the universal right to freedom of thought, conscience, and religion for all people in China, we urge the Chinese government to immediately release Gulshan from detention.

Gulshan visited the United States three times between 2013 and 2016 to see her two daughters, but abruptly disappeared in September 2018 and has had no contact with family members since. After relentlessly seeking answers on Gulshan’s whereabouts, her family was finally informed that she was sentenced to 20 years in prison on false charges.

As a beloved mother, sister, professional, and friend, we believe her detainment to be a form of retaliation by the Chinese government for her sister’s outspoken advocacy. Rushan Abbas, Executive Director of Campaign for Uyghurs, has dedicated years of her life to raising awareness about the mass internment of Uyghurs. The Abbas family continues to show deep courage and resilience in calling attention to Gulshan’s case. Despite resistance, the long arm of the Chinese government continues to reach Uyghurs and other religious minorities living abroad who are being pressured to remain silent about human rights abuses through threats to their families.

The Chinese government under the guidance of President Xi Jinping has escalated the persecution of people of faith with the ‘sinicization’ campaign, or to recreate religion to better align with Chinese Communist Party ideals. Tibetan Buddhists, Falun Gong practitioners, house church Christians, and Catholics have all been targeted. However, the devastation of the campaign is particularly evident in the crackdown on Uyghur Muslims. In Xinjiang Uyghur Autonomous Region (Uyghur Region), upwards of one million Uyghurs – mainly Muslims – are held in detention camps. Though the Chinese Communist Party claims these are anti-terrorism “reeducation camps”, evidence of mass forced sterilizations, forced labor, and baseless imprisonments point to more sinister outcomes of ethnic cleansing and genocide.

Unfortunately, Dr. Gulshan Abbas is one of a huge number of people arbitrarily imprisoned in the Uyghur Region. We call upon you and the Chinese government to take the first concrete steps in pursuing justice by unconditionally releasing Gulshan in light of her innocence.