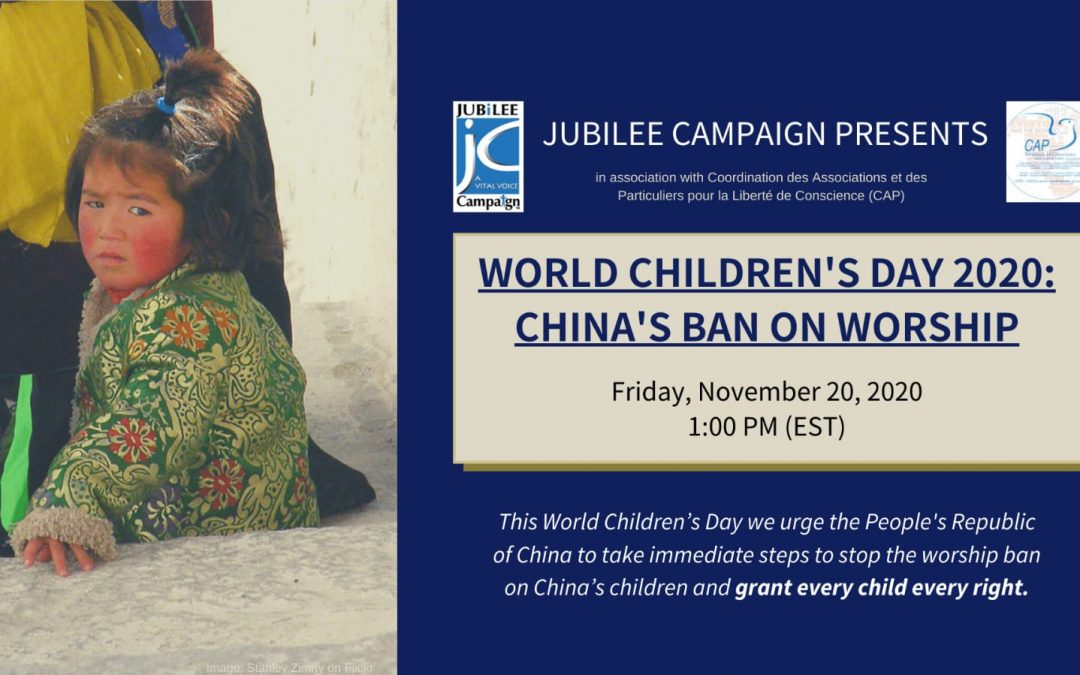 Each November 20, 2020, World Child Day is commemorated around the world. It is the day in 1959 when the UN General Assembly adopted the Declaration of the Rights of the Child. This year, the world focused on the theme that EVERY CHILD HAS EVERY RIGHT. Not so in China. China has banned all of its children from being able to worship anywhere. The Chinese Communist Party is ensuring that children cannot learn about their faith from their parents. Jubilee Campaign and CAP Liberté de Conscience held this event parallel with the U.N. General Assembly Third Committee. It was also broadcast in conjunction with the International Religious Freedom Ministerial hosted by Poland.

During this conference, the president of CAP Liberté de Conscience recalled that during the UPR session on China, the Report of the Office of the United Nations High Commissioner for Human Rights asked China to respect the rights of children to practice their religion.

“56. The Committee was deeply disturbed by frequent reports indicating that Tibetan and Uighur children and children of Falun Gong practitioners seeking to exercise their right to freedom of religion and conscience had been arrested, detained and subjected to ill-treatment and torture and that Tibetan children’s ability and freedom to study and practice their religion was restricted by measures such as those imposed on Tibetan monasteries and nunneries placing them under close control and surveillance.”

This conference gave us the opportunity to hear the testimony of Mr. Gao Lei :

My name is Gao Lei. I am from Fushun City, Liaoning Province, China. I am the son of a Falun Gong practitioner.

The persecution of Falun Gong that took place in China in 1999 and yet has not stopped so far, has left a deep scar in my memory and heart.

My mother used to be a middle-level manager in a state-owned enterprise, and also a party secretary.

I remember that my mother used to be in poor health, suffering from rheumatoid, and was hospitalised for a period of time almost every year.

When I was young, because there was a piece of missing hair on the back of my head, I always had fever and colds. My mother always took me to see a Chinese medicine doctor. It was difficult to swallow the Chinese medicine pills every time.

In 1997, my mother was introduced to Falun Gong, so she took me to listen to Mr. Li’s lecture. Mr. Li talked about a lot of astrophysics, I was very interested and deeply attracted.

Since then, my mother and I have started practicing. Every morning, we go to the park for morning exercises for 1-2 hours, then my parents go to work, and I go to school. This life style lasted for nearly 2 years.

On July 20, 1999, the Chinese Communist Party began to suppress Falun Gong. I was 14 years old that year.

During that time, I experienced fear, sadness, loneliness, not knowing whether I would lose my parents, and not knowing where the future will be. These feelings completely overturned my understanding of the country and the CCP government.

On the night before the Chinese New Year in 2000, dozens of police officers from the Public Security Bureau of Fushun, Liaoning (National Security Agency) came to my home and opened the security door of my house with tools. They kicked the door inside open, entered the house, grabbed my mother’s head and hit her head on the wall.

In panic, I cried and begged the police not to beat my mother, but they ignored me and said to me: Get out! If you get closer, I will beat you too. I dared not speak anymore, afraid that they would also beat me.

They took away all valuable things from my home, including personal belongings. The whole process was about 20 minutes. When the neighbour saw it, he came over and asked the police: What crime did they commit?

The police replied, we don’t care if they have committed a crime or not, we just come to arrest Falun Gong.

In early 2001, my mother went on a hunger strike in prison to protest. The police savagely force feeding her and beat her. My mother was dying of persecution. In order to cover up the crime of persecution, they didn’t want my mother to die in their hands. They called my father and said that my mother was critically ill, and asked him to take her home. At the same time, they threatened my father not to tell the outside world about it.

When my mother came home, I was stunned. My mother was skinny, lying on the bed, her arms and legs were left with only skin and bones. She couldn’t sit up and had to be taken care of by people, just like those who were in the Auschwitz concentration camp when the Nazis persecuted the Jews.

A living person was tortured like this! I could not believe this was true. In order to be a good person in accordance with Truthfulness, Compassion and Forbearance, my mother would suffer such inhuman persecution.

During the time when my mother was persecuted, I myself experienced unimaginable pain and loneliness.

First, it was pressure from the school.

At that time, I was studying in Fushun 42nd Middle School. The school had a new principal. According to classmates, the new principal once had beaten the students on the head in the original school.Because my mother was persecuted, the new principal ordered me to have a talk in the principal’s office. The principal asked, “Tell me in true words, what is your attitude towards Falun Gong?”

I was afraid of being expelled and didn’t dare to tell what I thought. I only replied: I answered that I had no attitude.

So, the principal warned me that he and the chief of police are relatives and had a good relationship, and would pay close attention to my every move. Later, I found out that he did send someone to follow me after school.

My living environment was completely changed. I have lost the normal life and social relationships that a child should have.

Downstairs from my home, there was a dedicated person with a red armband, monitoring my family’s every move 24/7.

People from the local community and the police came to my home, not only taking away all the books and photos about Falun Gong, but also personal belongings.

Since then, I have learned what is meant by “house-confiscation” and “residential surveillance”.

At school, I was unreasonably insulted by the principal and teachers, and my classmates did not dare to associate with me. I was lonely, I did not know when this day would end.

These are not movies, but stories that actually happened to me.

Twenty years have passed, and now as a father, I know how important it is to protect the rights of children. These persecutions are caused by the evil CCP and communism.

The CCP is an evil and illegal organisation. Only when the demon of the CCP is completely dismantled can we ensure that our next generation will not encounter everything I experienced in the future.

So, I call on all kind people in the world to participate in the disintegration of the CCP, sign the petition of ending the CCP, and work hard for our children.