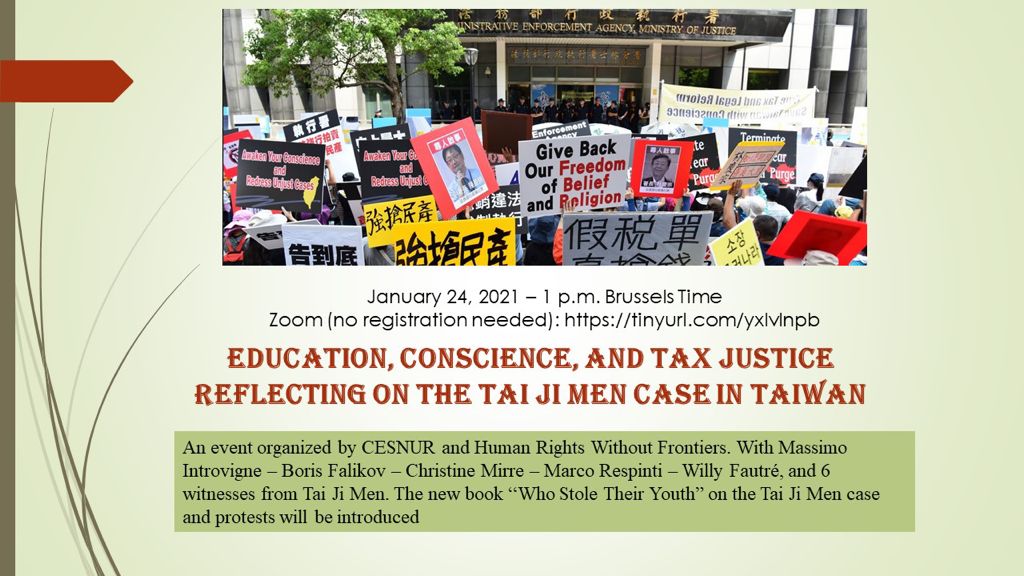 How taxes may be misused to persecute spiritual minorities.

On the occasion of this webinar, I would like to share with you the experience we had in France on the use of fiscal weapons to attack spiritual groups. This French policy has very strong similarities with the case of Tai Ji Men in Taiwan.

In 1996, the then Taiwanese government launched a crackdown on groups labelled as “xie jiao” or “cults,” which according to most scholars who have studied the incident, was politically motivated. The crackdown also involved Tai Ji Men, although it had not taken political sides.

In France, in 1996 a Parliamentary Commission of Inquiry established a blacklist of spiritual groups classified as cults.

One hundred seventy two movements were thus criminalized and a policy of repression was instituted against these spiritual groups.

Following this Parliamentary Commission of Inquiry, the Ministry of Justice published a circular in which it highlighted the tools of tax fraud that magistrates should use against the cults labelled associations.

In the same year, the Ministry of Interior also published a circular to highlight the crime of tax evasion to fight against “cults”.

In the years that followed, it was the Jehovah’s Witnesses in 1997, the Religious Association of the Pyramid Temple in 1995 , the Association of the Knights of the Golden Lotus in 1995 and the Evangelical Pentecostal Church of Besançon in 1996 which will be attacked by the French tax services.

All these associations will be declared fraudulent by the tax services and will be heavily condemned to tax adjustments of up to millions of euros in the case of Jehovah’s Witnesses.

All these spiritual groups after having exhausted all legal remedies have gone to defend their case to the European Court, where they will all be successful, France will be condemned for violation of Article 9 (Right to Freedom of Thought, Conscience and Religion)

Now, I will detail the most representative case, the one of the Jehovah’s Witnesses:

The tax administration tried to trick Jehovah’s Witnesses by forcing them through imposed accounting audits to disclose hand-to-hand gifts , although there is no legal obligation to do so.

There was a clear manipulation of the tax administration to corner the Association of Jehovah’s Witnesses and, as it appeared afterwards, to kill them financially. This shows another similarity with Tai Ji Men case.

After having exhausted all legal means in France, in 2005 the Jehovah’s Witnesses Association decided to appeal to the European Court.

In its judgment of Thirty June 2011, the European Court found a violation of Article 9 (Right to Freedom of Religion), noting that the supplementary tax assessment “had concerned the entirety of the manual gifts received by the association, although they represented the main source of its funding. Its operating resources having thus been cut, it had no longer been able to guarantee to its followers the free exercise of their religion in practical terms.”

By a judgment of 5 July 2011 the Court held that France was to reimburse the about 4 million euros for the taxes unduly claimed by the tax administration.

The European Court rendered similar decisions in favor of the 3 other associations questioned by the French tax services.

Unfortunately we can notice that this is the same strategy that is used to destroy spiritual groups that disturb States for various reasons.

Unable to find any fault that violates the law, the States deflect their own tax regulations in order to undermine these peaceful movements.

Those cases we have just seen, show that, despite the fact that it is a long and difficult fight , it can be won.