Freedom of Religion: From the USCIRF Report on Persecutions in Russia to Violations in Europe / FECRIS Is Almost Entirely Financed by the French State GONGO or NGO 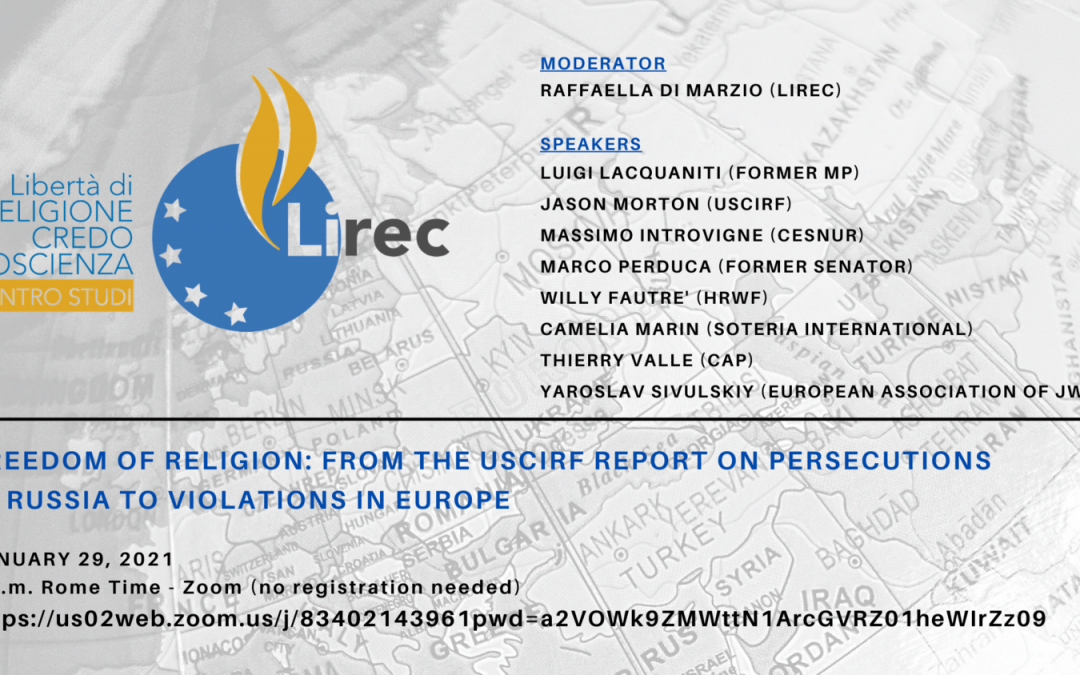 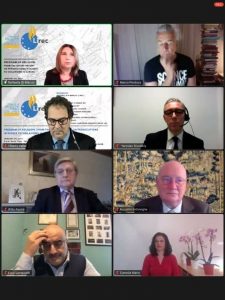 FECRIS (Federation of Centres of Research and Information on Cults and Sects) Is Almost Entirely Financed by the French State : GONGO or NGO

First, the NGO Branch should be apprised that FECRIS is in actuality not an NGO because it is almost entirely financed by the French State in order to forward France’s policies to “combat” minority belief groups in international forums.

Under Article 70 of the UN Charter, the ECOSOC may make arrangements for representatives of the « specialized agencies”, established by intergovernmental agreement, to participate without a vote in its deliberations, while under Article 71 it may make suitable arrangements for consultation with « non-governmental organizations » which are concerned with matters within its competence. Hence, under the UN Charter « specialized agencies » (governmental) and « NGOs » (private) are two distinct categories.

The Resolution of 25 July 1996 regulating the consultative relationship between the UN and NGOs indicates clearly that NGOs must be independent from governments. It also reproduces provisions regulating the financing of NGOs adopted in 1968 following revelations that the CIA had been funding some NGOs (without their knowledge). These provisions are as follows:

The basic resources of the organisation shall be derived in the main part from contributions of the national affiliates or other components or from individual members. Where voluntary contributions have been received, their amounts and donors shall be faithfully revealed to the Council Committee on Non-Governmental Organisations. Where, however, the above criterion is not fulfilled and an organisation is financed from other sources, it must explain to the satisfaction of the Committee its reasons for not meeting the requirements laid down in this paragraph. Any financial contribution or other support, direct or indirect, from a Government to the organisation shall be openly declared to the Committee through the Secretary-General and fully recorded in the financial and other records of the organisation and shall be devoted to purposes in accordance with the aims of the United Nations.

The normal financing of NGOs is through the contributions of individual members to reflect their representation of civil society. As an exception to this rule, State funding should be transparent and comply with the aims of the United Nations.

1) National Union of Associations of Defense of the Family and the Individual (UNADFI);

2) Center Against Mental Manipulations (CCMM) ; and

3) Study Group on Movements of Thought for the Prevention of the Individual) (GEMPPI).

All three of these organizations are also almost entirely funded by the French State:

While these associations pretend to defend human rights and to protect the interests of individuals against “sectarian organizations” they deem objectionable, this is not the case. In reality, they are not representative of civil society as their extremely low support from members of the public shows. They only survive through financial support by the French State.

Moreover, NGOs almost totally funded by States are extremely suspect when they operate in the human rights field. Such organizations are labeled as Government Organized NGOs or “GONGOs”, a phenomenon detailed in the recent state-of-the-art Encyclopedia of Life Support Systems of UNESCO:

The most difficult question about the independence of NGOs is whether they come under governmental influence. Individual governments do at times try to influence the NGO community in a particular field, by establishing NGOs that promote their policies. This has been recognized by quite common use of the acronym GONGO, to label a government-organized NGO.

Also, in more authoritarian societies, NGOs may find it very difficult to act independently and they may not receive acknowledgment from other political actors even when they are acting independently.

Beyond these unusual situations, there is a widespread prejudice that government funding leads to government control. In the field of human rights, it would damage an NGO for such a perception to arise, so Amnesty International has strict rules that it will not accept direct government funding for normal activities.

On the other hand, development and humanitarian relief NGOs need substantial resources, to run their operational programs, so most of them readily accept official funds. While these NGOs would like the security of a guaranteed budget for their administrative overheads, governments generally only want to support field costs for project.

So, contrary to development and humanitarian relief NGOs who yearn for government funding, true human rights organizations are very reluctant to accept it in order to preserve their independence.

They are so aware of the problem that on June 6, 2006, eleven prominent NGOs adopted the International Non-Governmental Organizations (INGO) Accountability Charter.[2] Stressing the need for civil society legitimacy, accountability and transparency of NGOs, they invited other INGOs to undertake the same commitment in order to promote and garner support for the highest common standards of conduct for NGOs working trans-nationally.

In the Charter, the signatories expound that they are independent non-profit organizations and they commit to the following:

We aim to be both politically and financially independent. Our governance, programmes and policies will be non-partisan, independent of specific governments, political parties and the business sector.

According to these international standards, an NGO pretending to act for human rights should be politically and financially independent.

Not only is it suspect to find government funding in NGOs which pretend to combat violations of human rights by the States, it is also suspect, in case of an NGO fighting against human rights violations purportedly committed by private groups as FECRIS pretends to do, that this NGO is almost entirely government funded and is in essence a camouflaged government organization.

This indicates that the NGO is used by the government to fight against certain targeted groups of civil society.

This phenomenon of GONGOs has been very well described at the 58th Annual United Nations Department of Public Information Conference at New York in September 2005, when Mrs. Shirin Ebadi, Iran lawyer, Nobel Peace Price 2003, explained it in the following terms:

A central attribute of an NGO is its independence from government. This characteristic, when combined with popular appeal, is the guarantee of its authenticity and effectiveness. Independence does not mean that NGOs cannot receive assistance from their own or other governments, but rather acceptance of such assistance should not influence their autonomy and non-partisanship. (…)

Another method undemocratic governments use to undermine the credibility and effectiveness of NGOs is to use the name for groups of their own creation. Members of such government controlled NGOs are then sent to international gatherings to issue false reports and raise irrelevant questions in order to distract public attention from the dismal human right record of those in power.

Such groups, which are in fact government NGOs known as GONGOs, actually present the agenda of the autocratic state while pretending to be non-partisan and by doing so, prevent the true voice of the people to reach the international community.

GONGOs are present in Africa supported by autocratic States.  But this situation has also been developing in Western democracies, where governments control NGOs by financing them quasi-entirely so that they forward their policies.

This growing and alarming global trend has been roundly criticized by NGOs, human rights groups and the media.

Gongos are sprouting everywhere; they are in China, Cuba, France, Tunisia and even in the United States.

Behind this contradictory, an important and growing global trend that deserves more scrutiny: Governments are funding and controlling nongovernmental organizations, often stealthily.

Some Gongos are benign, others irrelevant. But many, including those I mentioned, are dangerous. Some act as the thuggish arm of repressive governments.

Others use the practices of democracy to subtly undermine democracy at home. Abroad, the Gongos of repressive regimes lobby the United Nations and other international institutions, often posing as representatives of citizen groups with lofty aims when, in fact, they are nothing but agents of the governments that fund them. Some governments embed their Gongos deep in the societies of other countries and use them to advance their interests abroad.

This description precisely fits the case of FECRIS, which pretends to fight for human rights, but has been nearly entirely subsidized from the very beginning by the French government to promote its policies and to participate in international forums such as the Council of Europe, the OSCE and the United Nations to masquerade as an independent NGO while supporting the environment of religious intolerance promoted by French government officials who work for MIVILUDES.

This worrisome situation has been exposed by the UN Special Rapporteur for Religious Freedom in her report following her visit to France from 18 to 29 September 2005 in the following terms:[6]

And the Special Rapporteur pointed out the role played by government subsidized organizations, i.e. FECRIS’ affiliates UNADFI, CCMM and GEMMPI, in the stigmatization campaigns which lead to violations of minorities’ rights:

Nevertheless, FECRIS and its affiliates continue to go forward with their derogatory campaigns to denigrate religious minorities on behalf of the government. Yet, what the government may not do directly because it violates human rights treaties mandating religious pluralism and tolerance, it may not do indirectly by almost entirely subsidizing GONGOs like FECRIS to engage in activities in contravention of religious neutrality and tolerance. This violates the letter and spirit of human rights treaties and contravenes UN NGO standards.

At the Human Dimension Implementation Meeting of the OSCE on 29 September 2009 in Warsaw, FECRIS stated:

We do not believe that cults have any role to play in a body such as OSCE whose aim, among others, is the protection of those persecuted for their religious beliefs. Cults are rarely persecuted. They are not religions or even belief systems.

This denial of the most basic rights to minority belief groups and the lobby of FECRIS in international forums so that their voice would not be heard is totally contrary to the aims of the UN as expressed in the Charter, of practicing tolerance and dialogue and of promoting and encouraging respect for human rights and for fundamental freedoms for all without distinction as to race, sex, language, or religion.

While FECRIS portrays itself as a collection of national associations protecting the family, the individual and democratic society against “sectarian” activities, in reality, this group fosters and fuels discrimination and intolerance directed at minority religious organizations and their members in Europe through the dissemination of false and misleading information about them and through actions which interfere with their right to freedom of religion, freedom of association and freedom from discrimination.

FECRIS, under the guise of fighting against violations of human rights by minority belief groups which it labels “totalitarian groups” to make its activity look in alignment with the UN purposes, actually encourages activities contrary to fundamental human rights and the Rule of Law.

Even if the concerned beliefs or practices are not favored by FECRIS or the French authorities, it is not the State’s role to finance an ideological and intolerant fight against minority belief groups.

read the full docment : FECRIS Is Almost Entirely Financed by the French State GONGO or NGO 2021