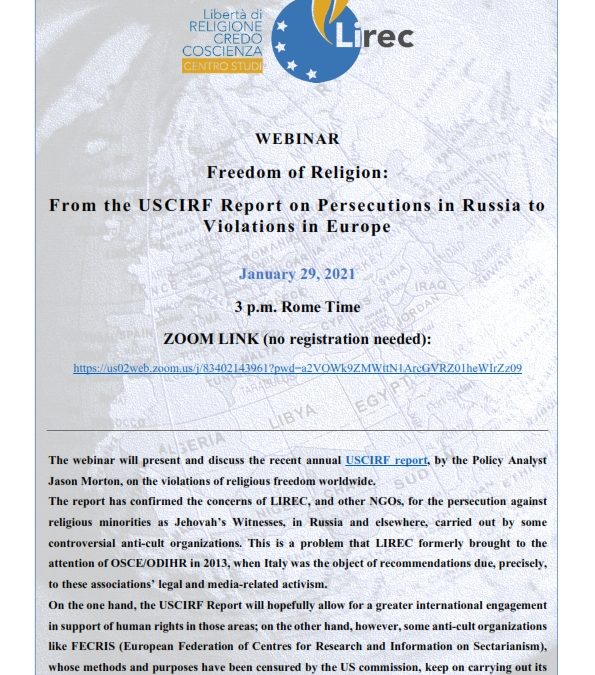 The webinar will present and discuss the recent annual USCIRF report, by the Policy Analyst Jason Morton, on the violations of religious freedom worldwide.

The report has confirmed the concerns of LIREC, and other NGOs, for the persecution against religious minorities as Jehovah’s Witnesses, in Russia and elsewhere, carried out by some controversial anti-cult organizations.

This is a problem that LIREC formerly brought to the attention of OSCE/ODIHR in 2013, when Italy was the object of recommendations due, precisely, to these associations’ legal and media-related activism.

On the one hand, the USCIRF Report will hopefully allow for a greater international engagement in support of human rights in those areas; on the other hand, however, some anti-cult organizations like FECRIS (European Federation of Centres for Research and Information on Sectarianism), whose methods and purposes have been censured by the US commission, keep on carrying out its activities undisturbed in Europe.

WILLY FAUTRE’, Director and Co-founder of Human Rights Without Frontiers (HRWF) – (Belgium)
The Activities of Fecris in the European Union

THIERRY VALLE, President of the Coordination of Associations and Individuals for Freedom of Conscience (CAP) – (France)
FECRIS Is Almost Entirely Financed by the French State: GONGO or NGO?