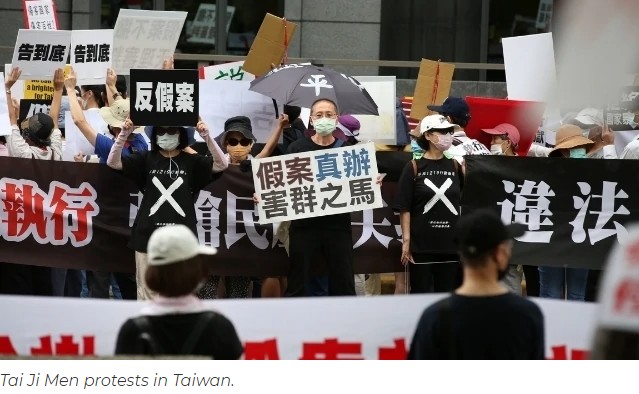 Interestingly enough, tax-based crackdown on spiritual movements started in France and Taiwan in the same year, 1996.

Taxes as a tool of religious discrimination

As human rights and religious liberty activists, we have experience in France of how fiscal weapons are used to attack spiritual groups. This French policy has strong similarities with the case of Tai Ji Men in Taiwan.

In 1996, the then Taiwanese government launched a crackdown on groups labelled as “xie jiao” or “cults,” which, according to most scholars who have studied the incident, was politically motivated. The crackdown also involved Tai Ji Men, although it had not taken political sides.

In France, in the same year 1996 a Parliamentary Commission of Inquiry established a blacklist of spiritual groups classified as “cults” (in French, sectes). 172 groups were thus criminalized, and a policy of repression was instituted against these spiritual movements.

Following this Parliamentary Commission of Inquiry, the Ministry of Justice published a circular in which it highlighted the tools that magistrates should use against associations qualified as “cults” by the Commission. In number 4 of the circular, we can read: “Breaches of the general tax code, and in particular tax fraud (article 1741 of the CGI).” In the same year, the Ministry of Interior also published a circular to highlight possible accusations involving the crime of tax evasion as a weapon to fight against “cults.”

All these associations were declared “fraudulent” by the tax services, and condemned to heavy tax adjustments, up to several million euros in the case of the Jehovah’s Witnesses.

All these spiritual groups, after having exhausted all legal remedies in France, went to defend their cases before the European Court of Human Rights, where they were all successful. The European Court found against France in all these cases, for violation of Article 9 (Right to Freedom of Thought, Conscience and Religion) of the European Convention on Human Rights.

The Case of The Jehovah’s Witnesses

I will focus here on the most representative case, the one of the Jehovah’s Witnesses. The French Association of Jehovah’s Witnesses asked that the tax exemption applicable to gifts and legacies to local or national associations established for the purpose of organizing and managing religious worship, and authorized religious congregations, continued to be applied to them after 1993, as it had happened for every year before that date.

The authorities claimed that the French Association of Jehovah’s Witnesses had not submitted the declaration requested by the tax authorities, and it was subjected to an automatic taxation procedure in respect of hand-to-hand gifts which it had received. The tax administration claimed that the hand-to-hand gifts “[had been] disclosed to the tax authorities in the course of the accounting audits to which it [had been] subjected”.

The term “disclosed” is a key word in the French administrative language dealing with taxes. It implies that the “disclosure” was a voluntary move by the Association, which for the authorities meant that it had accepted to be taxed on the money it had received. In fact, this was not the case. The audit was not requested by the French Association of Jehovah’s Witnesses, but was imposed on them by the tax administration and could not be refused. Moreover, there is no legal obligation to disclose hand-to-hand gifts to the tax administration. There was a clear manipulation of the administrative terminology to corner the French Association of Jehovah’s Witnesses and, as it appeared afterwards, to kill them financially. This shows another similarity with the Tai Ji Men case.

In May 1998, the Association was notified of a supplementary tax bill, for the equivalent of about 45 million euros. The Association stressed that the taxes claimed concerned “gifts,” by 250,000 persons over four years.

Decision of the European Court of Human Rights

After having exhausted all legal means in France, in 2005 the Association decided to appeal to the European Court of Human Rights.

In its judgment of 30 June 2011, the European Court found a violation of Article 9 (Right to Freedom of Religion), noting that the supplementary tax bill “had concerned the entirety of the manual gifts received by the Association, although they represented the main source of its funding. Its operating resources having thus been cut, it had no longer been able to guarantee to its followers the free exercise of their religion in practical terms.”

By a judgment of 5 July 2011, the Court held that France had to cancel the supplemental tax bill, and reimburse the 4,590,295 euros for the taxes unduly claimed by the tax administration that the Association of Jehovah’s Witnesses had paid under coercion, plus 55,000 euros for costs and expenses. The judgment was issued in French only.

The European Court rendered similar decisions in favor of the three other associations labeled as “cults,” and attacked by the French tax services.

Unfortunately, we can notice that the same strategy has been used in France and Taiwan to harass spiritual groups that disturbed States or bureaucrats for various reasons.

Unable to find any fault or crime, the States deflected their own tax regulations in order to undermine peaceful movements such as the Jehovah’s Witnesses and others in France, and Tai Ji Men in Taiwan.

The French cases decided by the European Court of Human Rights, however, may be a reason of hope for Tai Ji Men dizi. They show that, despite the fact that it is a long and difficult fight, it can be won.*

*A paper presented at the international webinar “Education, Conscience, and Tax Justice: Reflecting on the Tai Ji Men Tax Case in Taiwan,” January 24, 2021.