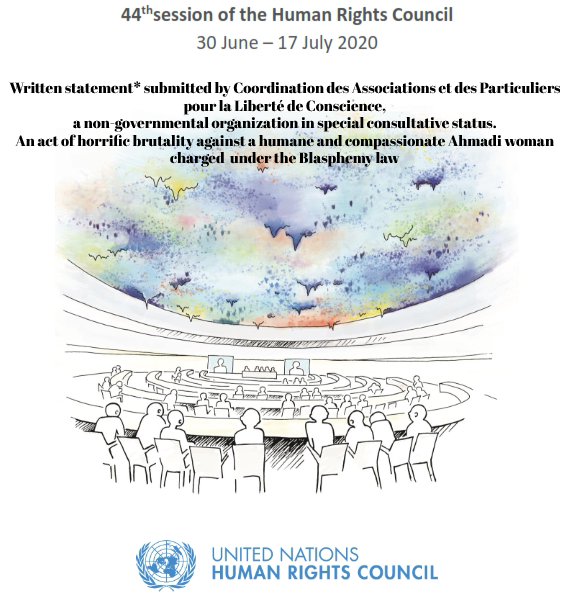 On April 30, 2020, an Ahmadi woman, Ramzan Bibi, who belonged to a village called Cheleki in the Nankana district was falsely accused of blasphemy against the Prophet of Islam, and thus booked under section 295-C, which calls for a death penalty for the accused.

The details of the matter are as follows: It is mostly the members of the same family living in Cheleki, some of whom have become Ahmadis. There have been incidents of minor friction between the two sections all along. However, on April 30, 2020, the situation became more serious when an Ahmadi woman, in her innocence and out of her good wishes for the non-Ahmadi community in the village, donated some money for an event being held in the mosque belonging to the non-Ahmadi residents of the village. Her donation was turned down and the amount was returned to her. This shocked her, and when she asked one of her nonAhmadi relatives about why the donation was rejected, the said relative – Amjad Abbas – assaulted her and hurled abuse at her. As some passersby tried to stop Amjad Abbas from being abusive, a quarrel broke out which resulted in some physical injuries to the Ahmadi woman.

When the non-Ahmadi clerics of the village came to know of the matter, they gave it a religious turn and called on the District Police Officer (DPO) to tell him that the woman had committed blasphemy against the Holy Prophet. In fact, this was a blatant lie fabricated merely to malign the innocent Ahmadi woman who was guilty of no other crime except of asking why her donation was not accepted. When the DPO formed a committee to probe into the matter, the clerics managed to have a non-Ahmadi resident of the village give a false and baseless testimony against the Ahmadi woman. As a result, she was arrested and taken to the local police station where a case was registered against her under section 295-C, which, as has been said before, entails capital punishment for the accused. She was kept at the police station for a few hours and then sent to Sheikhupura Jail. Later on, she was transferred to Kot Lakhpat Jail in Lahore, where she awaits trial. She is 55 years old.

The Pakistani clerics, media and politicians are on it again, fearlessly calling to publicly condemn and demand that Ahmadis be killed because of their faith and belief. The Holy month of Ramadhan is to be a month of peace and good-will, but the Pakistani clerics, media and politicians have no shame to behave in this manner and tarnish the name of Islam. The world should pressurise the Government of Pakistan to harness these culprits to save the image of Islam and the image of their own country, which they profess to be an Islamic democratic state.

We respectfully recommend to the Government of Pakistan to:

• Strengthen measures with regard to the elimination of violence and discrimination against persons belonging to religious minorities;

• Protect and safeguard the rights of Ahmadi Muslims as equal citizens of Pakistan;
• Finalize and fully implement the national policy on interfaith harmony, in order to, among other things, protect the rights of religious minorities;

• Continue adopting policies and measures to promote dialogue and tolerance among religions;

• Strengthen measures to follow according to the Pakistan constitution that all the citizens are equal and have the same civic rights.

We respectfully request the Government of Pakistan to strengthen the implementation of the United Nations treaties:

• Universal Declaration of the Human Rights: Art 18 Freedom of thought, conscience and religion.