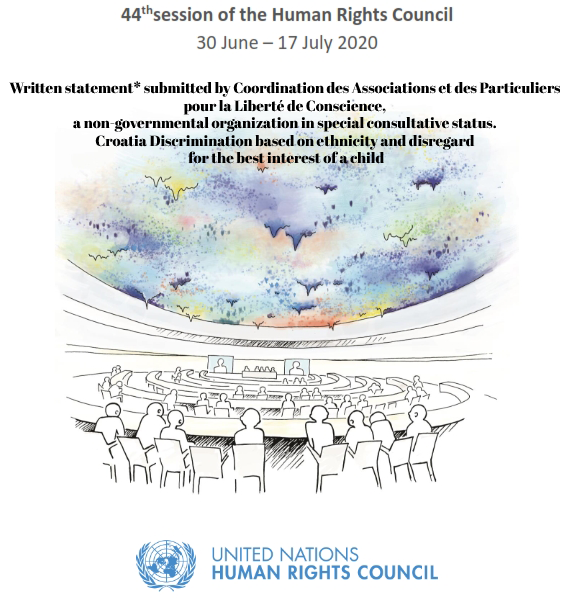 Mr. Dalibor Močević, a Croatian citizen of Serb descent, claims he is discriminated against by the administration and the judiciary in Croatia in a child custody case following his divorce because of his Serb origin. Political background of the discrimination by the judiciary Twenty-five years after the end of Croatia’s war for independence from Serbia, many Serbs living in Croatia go on complaining about the discriminatory treatment of their cases in courts by the judiciary.

Thousands of Serbs were displaced by the conflict until de mid-1990s. They were then illegally dispossessed of their property by the Croatian authorities on the basis of a controversial law on the “Temporary Takeover and Administration of Specified Property” passed at the end of summer 1995 but condemned by the Organization for Security and Cooperation in Europe (OSCE). Their houses and apartments were then given to displaced
Croats and could never be restituted to their legitimate owners through the Croat court system. Anti-Serb sentiments and discrimination by the Croat administration and the judiciary have not disappeared since.

In 2018, the European Commission on Racism and Intolerance (ECRI) of the Council of Europe (CoE), expressed alarm over the rise of right-wing extremism and anti-Serb hostility in its fifth report about Croatia, the first of the seven Western Balkans countries to join the European Union (EU).

Mr. Močević was married with Ž. Š. from Našice in the period from 1 January 2003 until 26 August 2006. The alcoholism of his wife was one of the reasons for the divorce. A son, I.M, was born from this marriage in February 2007. On 17 June 2008, the Municipal Court in Našice ruled that I.M was to be entrusted to the care of his mother. Mr. Močević was unable to get a shared custody and even visiting rights from the court. He strongly believes that the decision was motivated by his Serb background.

In January 2010, the Našice Municipal Court entrusted the child to the care of his maternal grandparents, living at the same address, upon request of the Center for Social Welfare Našice because of the alcoholism and psychiatric problems of the mother. Mr. Močević was not informed or notified that such a legal process was in progress although his address was known by the court. Again, he thinks that it is because of his Serb origin. Mr. Močević only became aware of this development much later. On 20 December 2010, he filed a request for custody of his son with the Našice Municipal Court because he wanted to
preserve his son from any physical and psychological damage. The mother was opposed to such a proposal. In January 2011, the Municipal Court of Našice restored the care of I.M. to the mother and allowed the father to see his son once a month for 10-12 hours in Našice. Mr. Močević appealed the decision, referring to his rights under the Family Law.

In accordance with the provisions of the Family Law, if one parent is unable to care for a child, then this obligation is taken over by another parent, and only if he or she is unable to care, the child can be entrusted to another person.

On 10 March 2011, the Osijek County Court overturned the first instance ruling and remanded the case for retrial. The County Court ruled that the disputed decision was taken in violation of the right to a fair trial because the father was not allowed to participate. Mr. Dalibor Močević proposed to conduct a psychiatric examination of the mother because he claimed that the child was under constant and chronic stress when he was with her. Instead, the court ordered a psychiatric examination of Mr. Močević, who had no history of mental illness or any dependencies. Again, Mr. Močević considers that this was due to anti-Serb sentiments.

In 2017 Mr. Močević’s ex-wife abandoned her son and left Croatia to an unknown destination. A year later she was extradited from Austria where she lived as a homeless person, mentally unstable and alcoholic. In early 2019 the Municipal court in Đakovo initiated new proceedings about the custody of I.M. Although the mother had abandoned her child, the family court judge Ankica Wolf ignored all evidence against the mother and denied
Mr. Močević the custody of his son. All requests Mr. Močević made in 2019 for the exclusion from the proceedings of the judge and the president of the court in Đakovo as well as the transfer of the jurisdiction to another court were either rejected or left without any decision by the Supreme Court of Croatia. The child is living for over 10 years now in a state of mental anguish. Mr. Močević is convinced that judges do not want to give the custody of his son because he is of Serb descent.

By decision of the Municipal Court in Našice to grant the sole custody of I.M. to his mother although she was under treatment for alcoholism and was suffering from personality disorder, the Croatian authorities did not act in the interest of the child and violated Mr. Močevič’s right to respect for his family life, as guaranteed by Article 8 § 2 of the European Convention and the Convention on the Rights of the Child.

The Convention entered into force on 2 September 1990 and has been ratified by 191 countries, including Croatia. The Convention spells out the basic human rights that children have everywhere – without any discrimination – : the right to survival; the right to develop to the fullest; the right to be protected from harmful influences, abuse and exploitation etc.

In the present case the courts didn’t act in accordance with the child’s best interest. Their decision was based on an 18-month-old report from the psychiatric hospital that treated Mr. Močević’s former wife. Moreover, the disputed procedure was not supported by relevant and sufficient reasons to justify such interference in Mr. Močević’s family life.

Therefore the court’s decision did not correspond to any overriding requirement in the child’s best interests. On the contrary, it clearly endangered such interest, in such a way that the national authorities overstepped their margin of appreciation when they granted the sole custody to a mentally unstable person. It thereby violated Mr. Močevićs’ rights under Articles 2 and 14 of the United Nations International Covenant on Civil and Political Rights, as well as Article 26 of the same Covenant, that forbids any discrimination based on national or social origin.

The behavior of the Family Court in Našice is also in complete breach of Articles 2, 3 and 9 of the Convention on the Rights of the Child Mr. Močević’s right to a fair trial was also violated because the court excluded him from most of the custody trial and failed to guarantee his constitutional right to equality before courts and other state bodies. Moreover, the biased decisions of judge Ankica Wolf, based on his ethnic origin according to Mr. Močević, caused systematic and continuous damage to the best interest of the child.

In addition to this, the expertise was entrusted to an expert who is not specialized in children’s psychology, despite Mr. Močević’s arguments. Moreover, the court did not need to carry out a psychiatric evaluation of the father as he has no history of any mental or psychiatric problems, unlike the mother to whom the court entrusted sole custody of the child. In addition, Mr. Močević was discriminated against on the basis of his professional activities since it was alleged that as a seaman he could not have had frequent contacts with the child.

In the divorce proceedings, the courts and the Center for Social Welfare were acting with obvious bias and prejudice and prevented Mr. Močević from having a regular contact with his son.

These troubles have an obvious political connotation but they continue unhindered despite the domestic and international legal obligations of Croatia, which is currently chairing the EU. These obligations in the case of Mr. Dalobor Močević have not only been unfulfilled by Croatia, but they have been actively undermined due to the persistent anti-Serb climate maintained by nationalist and extreme-right groups.

Mr. Močević insists that he was repeatedly denied justice because of his Serb origin. As a result, the Croatian courts and administration have not acted in the interest of his son. His lawyer also shares the view that other Serbs in Croatia are discriminated against due to various personal or institutional collusions between some judges, political figures and extreme nationalists.