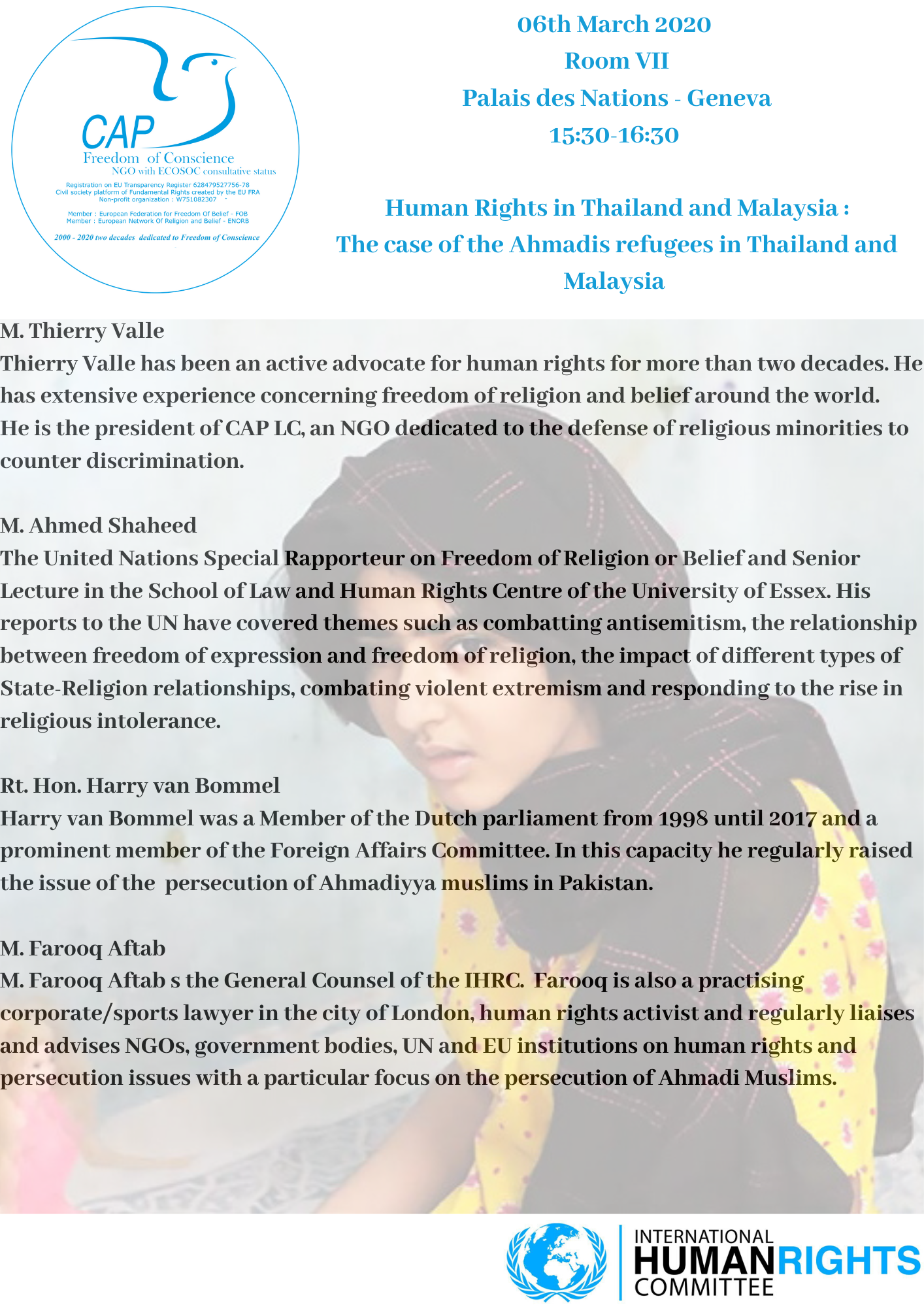 The United Nations Special Rapporteur on Freedom of Religion or Belief and Senior Lecture in the School of Law and Human Rights Centre of the University of Essex. His reports to the UN have covered themes such as combatting antisemitism, the relationship between freedom of expression and freedom of religion, the impact of different types of State-Religion relationships, combating violent extremism and responding to the rise in religious intolerance. These reports have examined the normative contours of the right to freedom of religion of belief and opportunities to advance the implementation of the right to freedom of religion or belief. A former Foreign Minister from the Maldives, he served as the UN Special Rapporteur on the situation of human rights in Iran from 2011-2016.

Harry van Bommel was a Member of the Dutch parliament from 1998 until 2017 and a prominent member of the Foreign Affairs Committee. In this capacity he regularly raised the issue of the persecution of Ahmadiyya muslims in Pakistan. Mr. Van Bommel has a Master’s degree in Political Science from the University of Amsterdam, and holds a Bachelor degree in education. A staunch supporter of people’s livelihood in areas of poverty and injustice, he has been a regular visitor to developing countries in Africa and Asia, with a strong focus on the position of ethnic and religious minorities. On his initiative the Caliph of the Ahmadiyya Muslim Community, His Holiness Mirza Masroor Ahmad was invited to address the Dutch Parliament. Mr. Van Bommel in recent years trained young politicians and activists in Iraq, Egypt, Surinam and Armenia. Harry van Bommel currently serves as strategic advisor to the council of Zwolle in the Netherlands and is still active as an international election monitor for the Organization for Security and Cooperation in Europe (OSCE).

M. Farooq Aftab is the General Counsel of the IHRC. Farooq is also a practising corporate/sports lawyer in the city of London, human rights activist and regularly liaises and advises NGOs, government bodies, UN and EU institutions on human rights and persecution issues with a particular focus on the persecution of Ahmadi Muslims. Most recently he was involved in the WA Court of Appeal case in the UK and works in a pro bono capacity on human rights related issues, particularly freedom of region or belief throughout the world He is a frequent speaker on Islamic and social issues at conferences, universities, schools, churches and other public events. He has appeared on numerous national and regional news outlets commenting on a range of issues such as human rights, radicalisation, extremism and refugees.