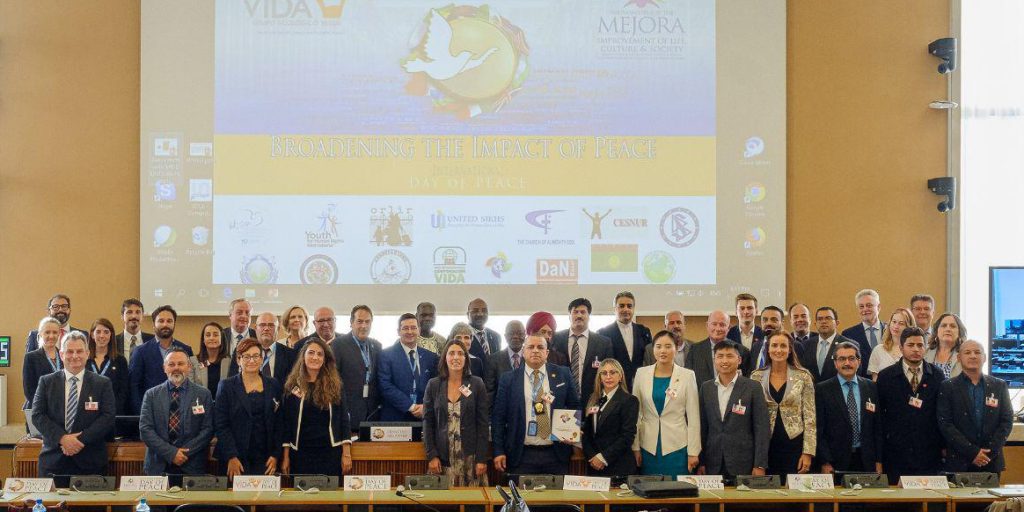 Good afternoon everyone, I’m a Christian from The Church of Almighty God. I would like to thank the organizers for inviting us to attend this conference. Everyone sitting here in this room is a peace-lover, who opposes terror, evil, violence, and war, and who has never ceased fighting for world peace. Thank God for His protection of all the righteous people who, despite the dangers they face in this world, still travel hither and yon and appeal for peace.

The Church of Almighty God is a Chinese Christian new religious movement. In 1991, when all mankind was yearning for peace and the return of the Savior, Almighty God appeared in the east of the world and thereafter expressed millions of words. After hearing His voice, people from various denominations who like the truth returned before God’s throne, and thereby The Church of Almighty God came into being. However, as the kingdom gospel was spreading rapidly, the Chinese Communist atheist regime started to frantically suppress and persecute the Church, and has not stopped but kept intensifying its efforts. Many Christians of the Church were driven to the wall and had to flee abroad.

This year witnesses the 38th international day of peace. However, to this day the world is still filled with religious persecution, war, terrorism, and riots. How many people are wailing under the shadow of terror, how many families are torn apart, and how many people are wandering without a home? Mankind all yearn for peace, but this simple wish of them cannot be fulfilled. Why is this world so dark and evil? This is a question that puzzles people greatly, but some are able to see through the myths and understand one clear fact: the main cause of the world’s lack of peace and stability lies in the existence of the evil forces and totalitarian regimes. The largest of these totalitarian systems, and the one I and many brothers and sisters have direct experience of, is the regime that centers around the Chinese Communist Party, or the CCP for short. Since the CCP took power, it has always been cruelly suppressing and persecuting Christianity. During the 28 years since the foundation of The Church of Almighty God, it has suffered a million arrests. Many Christians were tortured and more than a hundred died as a result. What’s more, about 600,000 were rendered homeless and are fleeing to escape the CCP’s arrest. In recent years, the CCP is endeavoring to eradicate all religious faiths. In broad daylight, the CCP destroys churches and removes crosses. It also burns Bibles and arrests and tortures Christians. A large number of mosques, and Buddhist and Taoist temples were laid waste. And several million Muslim Uyghurs are locked up in concentration camps. During the short span of 70 years under the CCP’s reign, at least 100 to 200 million Chinese people died of unnatural death. The actions of the CCP have plunged the Chinese people into an abyss of misery and provoked the indignation of the heaven and people. It is like the whole mainland China is engulfed by dark clouds and cries of grief can be heard everywhere. Many Chinese people are seeking ways to flee abroad. The CCP does not just bring disasters to the people in China, it even wishes to export its system abroad. It has invested great efforts in training spies and even lobbies and bribes political figures of other countries in order to infiltrate and disintegrate other countries. It also steals intellectual property and business and military secrets from the U.S. and other western countries. In 2014, the CCP has adopted the Belt and Road Initiative economic strategy, attempting to take control of global affairs through debt-trap diplomacy. As is proven by facts, where the CCP’s hands reach, where there is turmoil, misfortune and pain.

Of course, we do realize that peace in the world is threatened by many other evils. All autocracies have to be eradicated for the world to live in peace! However, many fear the totalitarian powers and dare not voice out. Can we truly achieve our goal of world peace if everyone chooses to do the same? Today, several million people from Hong Kong have stood up. They have sworn to fight against the CCP until the end and not accept any compromise. Many groups suffering from the CCP’s persecution home and abroad have united as well, firmly rejecting the CCP’s tyranny.

In recent years, under God’s guidance, The Church of Almighty God has produced a large number of films, choir performances and variety shows. These productions disclose the CCP’s cruel persecution of Christians so that more people can see its evil essence of defying God and harming people. Most importantly, we are spreading Almighty God’s words, conveying the message of God’s love and salvation of mankind, and testifying to all positive things that come from God, such as how to obey and worship God, how to get rid of our corruption and live a true life, and bringing peace and hope to mankind. We have also been actively participating in human rights activities in various countries abroad, supporting Uyghurs, Tibetans and democratic dissidents and appealing to the international community to pay attention to and get to know the facts of the religious persecution and human rights violations both in China and other countries. We do not ask peace and religious liberty only for our Church but for all believers and indeed for all human beings.

When all powers of terror and evil collapse, the world will be able to achieve real peace. It’s just as Almighty God said: “The anger of God is due to the harm that the existence and interference of injustice brings upon His mankind, because of the existence of evil and darkness, because of the existence of things that drive out the truth, and even more, because of the existence of things that oppose what is good and beautiful.” We’d like to urge all those who long for justice and peace and loathe evil to take action and fight against the tyranny of the totalitarian regimes that, in China and elsewhere, deny to their citizen religious freedom and the basic human rights. We also pray and ask God to raise up more countries to impose sanctions on the perpetrators, including the CCP. We believe that God will surely destroy the evil forces that slaughter and devour mankind and bring man true peace and into beautiful destinations. Almighty God said: “I will correct the injustices of the human world. I will do My work with My own hands throughout the world, forbidding Satan from harming My people again, forbidding the enemies from doing whatever they please again. I will become King on earth and move My throne there, making all My enemies fall to the ground and confess their crimes before Me. … My plan is already fixed, and no one, no matter who they are, will be able to change it. As I roam in majestic pomp above the universe, all humanity will be made new, and everything will be revived. Man will no longer weep, and no longer will he cry out to Me for help. Then My heart will rejoice, and the people will return in celebration to Me. The whole universe, from top to bottom, will roil in jubilation.” Thank God!