INTOLERANCE LEVELS AT THEIR HIGHEST. BRUTAL KILLING OF A CHRISTIAN PRIEST IN PESHAWAR, PAKISTAN 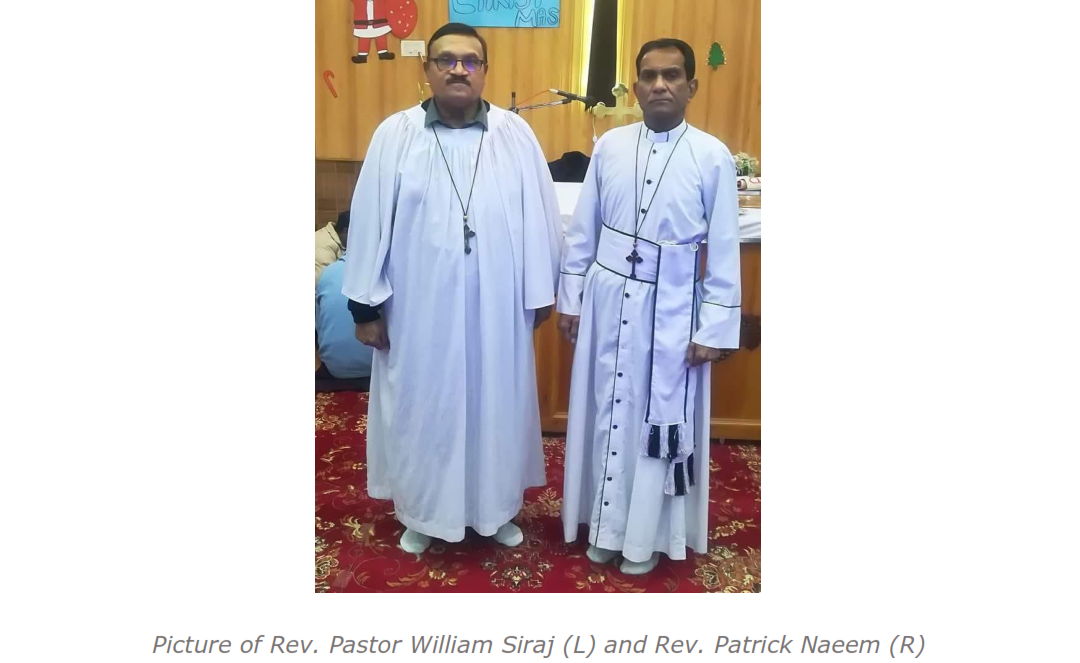 CAP Freedom of Conscience joins IHRC in calling for an end to religious persecution of all communities in Pakistan.
The government of Pakistan must comply with the international treaties it has signed.

IHRC brings into your kind notice about another unpleasant incident of the assassination of Rev. Pastor William Siraj aged 70 (L in the photo) an assistant pastor of Church of Pakistan, Peshawar Diocese, who was shot dead on 30 January 2022 at about 02:15pm afternoon in Peshawar. The other pastor identified as Rev. Patrick Naeem (R in the photo) survived the targeted killing attempt and according to the doctors he is critical but out of danger. Both pastors shifted to the Lady Reading Hospital Peshawar where Rev. Pastor William Siraj was pronounced as dead.

According to the police the arrest of the criminal assailants is underway and the police parties conducting raids with the help of CCTV footages. The Police said the two pastors were leaving a city church following Sunday Mass when two men riding a motorcycle ambushed and opened fire on the pastors’ vehicle.

It is pity that the year 2022 started with a heinous hate attack on Pakistani Christians. In the year 2013 a deadliest attack occurred when two suicide bombers blew themselves up at All Saints Church as hundreds of worshipers were leaving Sunday Mass. The assault killed at least 80 Christian worshipers and wounded more than 150 others.

This is another episode of the plight of Pakistani Christians as the state has totally failed to protect its citizens from religious intolerance, religious based hatred, violence in the name of religion and persecution. Many previous incidents of assassinations, targeted killings and violent attacks on Christians have been witnessed the agony of innocent Christians.

IHRC regularly highlights the grave situation of religious persecution against minorities in particular in Pakistan. Christians are specially the victims of false
allegations of blasphemy, religious hatred and persecution, as are the members of the Ahmadiyya community. The present situation has worsened as the country is hijacked by the so-called Islamists who wish to impose their brand of Islamization in the country and promote religious bigotry and hatred openly which goes totally against the beautiful Islamic teachings of adopting peace and harmony in society. Such despiteful incidents are now a way of life in Pakistan. The extremist organizations seemed to have overpowered the law enforcing agencies and even the judiciary has succumbed to their pressures. No religious minority is safe in Pakistan. All that is happening in day light under the nose of the world and yet the world has not done what needs to be done to stop it.

IHRC is there to seek justice for the victims of religious persecution and calls on all those who stand for freedom of religion, faith and practice to wake up the Government of Pakistan to act to stop such horrific atrocities taking place almost every day.

We further urge the international community to impress upon the Government of Pakistan, that perpetrators of such vicious attacks should be brought to justice, to bring its laws and practices in conformity with international standards as ordained by Article 20 and United Nations Universal Declaration of Human Rights Article 2, 18 and the International Covenant on Civil and Political Rights (ICCPR) Article 25, 26.