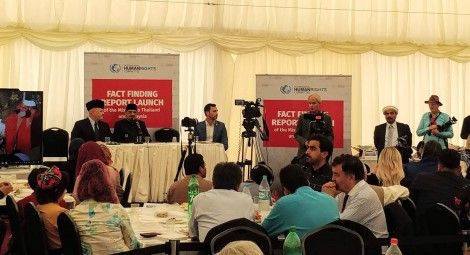 Members of the international investigating team included lawyers, researchers, politicians, a journalist and a psychologist who conducted several hundred interviews to assess the current situation of Ahmadi refugees who have sought asylum in Thailand and Malaysia after fleeing persecution and violence in Pakistan.

Neither Thailand nor Malaysia are signatory to the 1951 Convention Relating to the Status of Refugees or its 1967 protocol, and both countries lack a national asylum policy. Without legal status, refugees in both countries are vulnerable to arrest, indefinite detention, and deportation.

The investigating team found that Ahmadi refugees in both countries faced restrictions in access to proper legal advice, healthcare and education, with many working illegally and living in fear of detention and arrest. Conditions in the Immigration Detention Centres (IDCs) were found to be both “inhumane and deplorable.” Cells hold over 100 detainees who only have use of two or three toilets between them. Many suffer from multiple physical and psychological illnesses; diseases such as scabies and tuberculosis are rife, and refugees had severely limited access to basic needs like clean water, adequate food and medical care.

Pakistan’s Ahmadiyya Muslim Community has continued to face widespread persecution since 1974, when the Second Amendment to the constitution was introduced and declared them as non-Muslim. This measure increased intimidation and harassment against the community and was followed in 1984 by the promulgation of Ordinance XX (20) in which Sections 298-B and 298-C were added to the Pakistan Penal code, imposing severe restrictions on their religious beliefs and criminalising the practice of their faith. Though many refugees experienced grave violations of freedom of religion or belief in Pakistan they felt that the conditions in Thailand and Malaysia were even worse. One refugee said: “At least in Pakistan we die from a bullet but in Thailand it is a slow death.”

The report makes a number of recommendations, including urging Thailand and Malaysia to sign the 1951 Refugee Convention and implement National Screening Mechanisms to improve the identification and protection of refugees. It urges the UN High Commissioner for Refugees to adopt a more proactive approach to processing refugees; to provide them with better access to healthcare and education, and more support to integrate locally. The report also calls on international governments to increase their annual refugee quotas and to look at alternative pathways to resettlement.