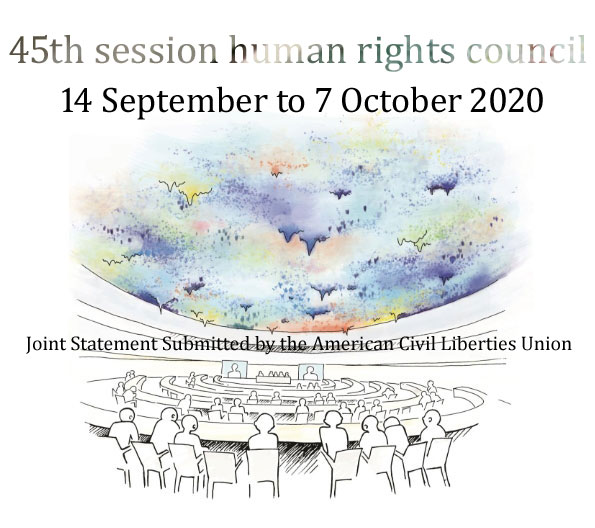 This is a joint statement.

The resolution has mandated the High Commissioner, with the assistance of relevant Special Mandate Holders, “to prepare a report on systemic racism, violations of international human rights law against Africans and people of African descent by law enforcement agencies, especially those incidents that resulted in the death of George Floyd and other Africans and of people of African descent, to contribute to accountability and redress for victims.” The resolution has also requested that your office “examine government responses to antiracism peaceful process peaceful protests, including the alleged use of excessive force against protesters, bystanders and journalists.” In addition, the resolution also requested that the High Commissioner “include updates on police brutality against Africans and people of African descent in all her oral updates to the Council.”

While we were disappointed that the Council adopted a watered-down resolution due to enormous diplomatic pressure from the United States and other allied countries, we consider the outcome of the urgent debate a crucial first step towards full accountability for systemic police violence against Black people in the United States and more generally against people of African descent around the world. We make the following recommendations and suggestions to ensure effective implementation of the resolution and a transparent, inclusive process for producing the report with maximum meaningful participation and engagement from directly impacted communities and other relevant stakeholders:

First, report should center the lived experiences of people of African descent and be informed primarily by individuals and communities directly impacted by structural racism and police violence.

Second, report must examine and highlight individual cases of extrajudicial killings of people of African descent and entrenched impunity for police violence rooted in structural racism. The reference to the killing of “other Africans and of people of African descent” suggests that George Floyd’s horrific murder should not be the only case examined and highlighted in the report.

Third, report should thoroughly examine the history of racist policing in the United States and other countries in order to make recommendations for a concrete path forward regarding the Council’s role to ensure effective accountability and follow-up. The report should build and expand upon, rather than replicate, previous research and reports published by regional and international human rights bodies, including UN treaty bodies and relevant Special Mandate Holders.

Fourth, the implementation of this Council resolution resulting from an historic urgent debate should be of high priority. Sufficient resources must be allocated to ensure that the report comprehensively and thoroughly examines structural racism and police violence.

Fifth, the report must be based on regional hearings and consultations, potentially facilitated by OHCHR’s regional and field offices, that will provide adequate and meaningful opportunities for a wide range of voices and experiences to be presented. Holding public hearings will increase the transparency and legitimacy of the process and outcome. It will also create opportunities to educate the public on racial justice and the importance of the Black Lives Matter movement at this historic juncture.