Will it be worthwhile participating in the next HDIM?
All the participants’ statements and papers in the last five years have just been removed from the website of the OSCE/ODIHR.
To the attention of Ms. Ingibjorg GISLADOTTIR, Director,
For more than 20 years, I have participated in the annual OSCE/ODIHR conference in Warsaw, now called Human Dimension Implementation Meeting (HDIM), a unique advocacy event for human rights defenders and CSOs, that started in the military barracks near the airport where, in 1955, the Warsaw Pact was signed.
I have regularly used the database of all the statements and speeches compiled on the website of ODIHR for my research, my papers and my conferences.
Earlier this month I again visited the website of the OSCE/ODIHR on several occasions, until a few days ago I discovered that:
ALL the pages devoted to the HDIM from the very beginning of this process until 2013 had suddenly and silently ‘disappeared’.
ALL the statements and speeches filed under the HDIM 2014, 2015, 2016, 2017, 2018 had also ‘disappeared’.
What was kept on the website is mostly irrelevant information: Hotels in Warsaw- Hotels Special Rates – Cost for Side Event Services, etc.
There was apparently a will to cleanse disturbing information, which looks like an act of censorship.
The statements at HDIMs and before have been erased from the history and the memory of the OSCE. This is not only its property but it is also the property of human rights NGOs and victims of human rights violations. This heritage is also the property of this and the next generations of human rights activists.
The materials presented at HDIMs is a monument to the victims of totalitarian and dictatorial regimes and also a reminder of the fragility of human rights in democratic states and as such, it is similar to a monument dedicated to the victims of Nazism and Communism.
Why was such a sacrilege perpetrated? Who was mandated to make such a mutilation? What is behind such a move? Did it disturb Participating States?
Will the statements and speeches of the 2019 HDIM also soon ‘disappear’ in the bowels of the oblivion as if the human rights violations denounced by CSOs had never existed?
Is it worth going to the 2020 HDIM if it is reduced to a confidential exchange of oral statements and rights of reply doomed to be withdrawn from the public eye after a short time?
Our recommendation to the OSCE/ ODIHR is simple: Fully restore the archives of the HDIM process and make them fully accessible again to the international community.
30 September 2019

OSCE 2017 : side event Freedom of expression and religion rights Struggles and Challenges 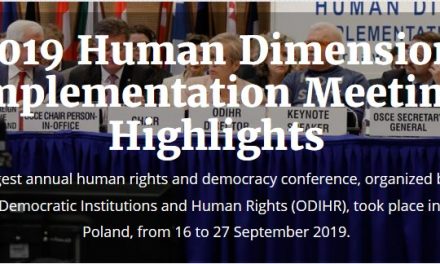