Presentation of the Final Acts of the convention “Law and Freedom of Belief in Europe, an arduous journey” and launch of the project “Right to Truth” 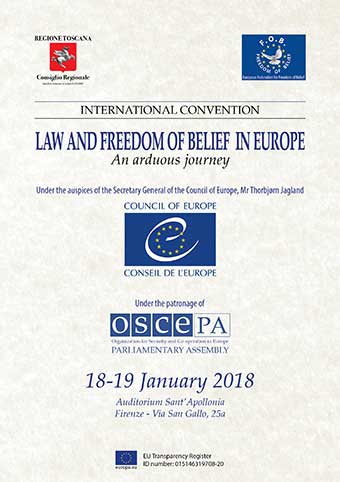 Monday, February 4, 2019, in the beautiful setting of the “Hall of Feasts” of the eighteenth-century “Palazzo Bastogi” of Florence, seat of the Regional Council of Tuscany, was held the event of presentation of the prestigious volume of the Final Acts of the FOB (European Federation for Freedom of Belief) convention “Law and Freedom of Belief, an arduous journey”.

The weighty elegantly bound volume, published by Pacini Giuridica in two languages (Italian and English), part of the special series “Freedom of Belief”, is the report of the high-level technical and international convention held on 18th and 19th January 2018 in Florence, at the Sant’Apollonia Auditorium. The work is available online and in specialized bookshops.

In front of a large audience of jurists, academics and representatives of various religious confessions, Professor Silvio Calzolari, FOB Secretary, opened the event emphasizing the secular character of the Federation and describing its purpose, which is the promotion of the freedom of belief, whatever it is, including the freedom to disbelieve. Professor Calzolari recalled that the 2018 conference was held under the auspices of the Secretary General of the Council of Europe (Dr. Thorbjørn Jagland), that it received the patronage of the Tuscany Region, that of the Parliamentary Assembly of the OSCE (Organization for Security and Cooperation in Europe) and of the University of Florence, and was honored with the awarding of the Medal of the President of the Republic Sergio Mattarella. Calzolari also read a brief greeting from the Vice Prefect of Florence, Doctor Nelly Ippolito Macrina, authoritative speaker at the convention of which the book of the proceedings has been presented.

There were then the interventions of the President of the Council of the Region of Tuscany, Dr. Eugenio Giani, of Hon. Riccardo Migliori, past president of the OSCE Parliamentary Assembly, of FOB President, Human Rights lawyer Alessandro Amicarelli and of lawyer and philosopher of law, Fabrizio d’Agostini.

Hon. Riccardo Migliori, FOB supporter since the first hour, has described the volume of the Acts of the convention as “a vademecum for those who want to hinge on the side of the rights to ensure that every day, in some part of the world, there are people who have a suitable equipment to face the good fight”. He then spoke “not about the danger of the fake news, from which the demand of the right to truth derives, but of the fake mass media, which is worse. It’s the fake news – he continued – of the official information. This is a big risk for the truth, for democracy, for the relations between information and citizens, for the formation of consciences.”

Following, President Alessandro Amicarelli, analyzing the activities of FOB during last year and the extra-European commitments of the Federation, spoke, among other things, of the religious movements persecuted in China and the role of the government media in creating fake news against such confessions. To the faithfuls of these persecuted groups, such as the Church of Almighty God, a movement that – according to official Chinese sources in 2014 reached the four million members – asylum applications are denied by Western governments, as officials who process the applications and grant authorization documented themselves online finding distorted and negative information created by the Chinese government media and then drawn on by the Western media that “certify” them. Hence the need to create an operational manual to train those who must decide on the applications of asylum seekers and on many other issues. Amicarelli, in exposing the chronology of the activities carried out by FOB in its relatively short but intense life, pointed out that the objective of FOB is to make what already exists operational. FOB does not want to create anything new; there are international conventions and national laws that need to be implemented. To this end FOB renews its constant commitment of direct contact with representatives of national, European and international institutions.

Also Eugenio Giani, a man of vast culture inspired, among other things, by the legendary Florentine mayor La Pira, describing the book of the proceedings, spoke of a volume of reference. The President of the Council of the Tuscany Region has produced a wonderful lectio magistralis on political and geographical Europe, on the varied reality of religions in Europe and in Florence and Tuscany, the cradle of humanism that, with Dante, Cosimo de Medici and the Renaissance, gave an example of integration and constant comparison among the great religions of that time, a tradition that continues today as then.

The last speaker of the event was lawyer Fabrizio d’Agostini, founding director of FOB and intellectual father of the convention “Law and Freedom of Belief in Europe, an arduous journey.” His speech represented the closure of this project and the start of a new great commitment for the Federation: the ambitious “Right to Truth” project, which will also be the theme of next FOB international conference.

It is about the elaboration and presentation of a completely new right. A right that should be adopted and implemented by all nations if we really want to face the challenges presented by a society undergoing a very rapid change. Challenges generated by modern and very fast communication technologies and dissemination of information and misinformation and by the frenetic melting pot of cultures generated by the enormous migratory flows in progress. Without the “Right to Truth” there can hardly be a freedom of belief, not to mention many of the other human rights. Even less, the guidelines of the FoRB program (Freedom of Religion or Belief), adopted six years ago by the European Union, can really be implemented.

Here is the text of the intervention The right to “truth” by Fabrizio d’Agostini.

The video recordings of the interventions (in italian language) can be viewed visiting this page.