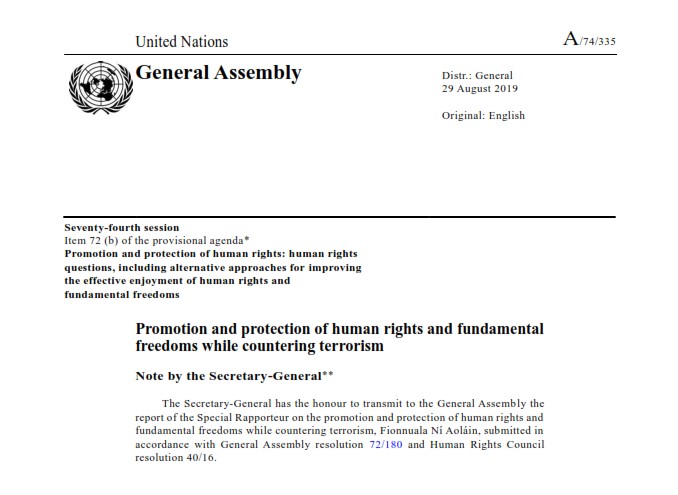 In the present report, the Special Rapporteur addresses the role of “soft law” and  new institutions in the creation, enforcement, oversight and regulation of counter terrorism measures. The Special Rapporteur reflects on the increasing importance of the role of soft law instruments since September 2001. She notes that States increasingly use soft law standards to regulate the prevention and countering of terrorism and violent extremism. She identifies a range of soft law instruments and assesses their normative and practical importance for States. The Special Rapporteur identifies and maps a range of institutions and entities producing such norms, considering their membership, legal basis, terms of reference and working methods.
She traces the movement of some soft law norms to hard law standards to illustrate the dense relationship between hard and soft law in that respect.  The Special Rapporteur pays particular attention to the role of and pathways by which human rights can be meaningfully integrated, accounted for and benchmarked in the creation of counter-terrorism soft law, instead of being marginalized. Building on her previous report (A/73/361), she underscores the importance of transparent and
legitimate governance in the soft law arena.
The Special Rapporteur maps access for and engagement with civil society,
non-governmental organizations and human rights experts in the making of counter terrorism soft law by new entities focused on counter-terrorism. She provides two primary case studies to illustrate some of the broader patterns of inclusion and exclusion applied to States and civil society.
The Special Rapporteur makes concrete recommendations to further human rights compliance in the adoption and implementation of soft law norms in the counterterrorism arena. She encourages the paying of greater attention to and the greater transparency of new counter-terrorism entities, which have an increasing role in, and influence on, counter-terrorism regulation. She affirms the necessity of thorough, expert and consistent human rights integration into the development of soft law, the
adoption of soft law standards into hard law rules and the operation and functioning of new counter-terrorism entities that develop soft law and best practices.