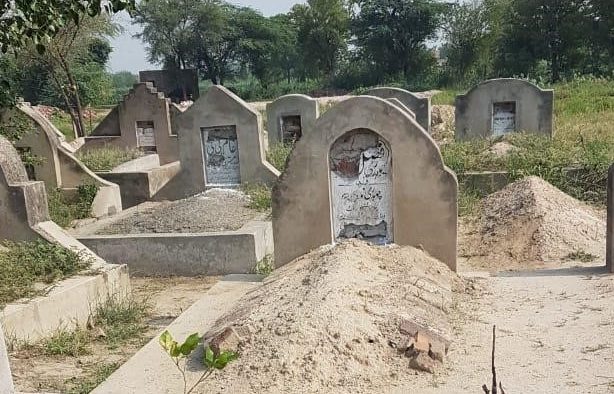 Treating the dead and their graves with dignity is a primary human value. The clerics of Pakistan have lost all their humanity and are acting ruthlessly without any regard for the dead or the places of their burial.

It is devastating to report that in a rural settlement, Chak No.79, District Sheikhupura, the Muslim vandals entered an Ahmadiyya graveyard and destroyed the grave plaques forcing Ahmadis to delete the prayers written on them in Arabic.

When the matter was reported to the Police, as always, they supported and sided with the hooligans ignoring their acts of destroying the graves and insulting the dead. No action was taken against them and Ahmadis were directed by the authorities to look for an alternative place for the burial of their dead. These brutal acts were followed up by hate mongering propaganda against the Ahmadis.

All this happened during the last week of June 2020 and tension in the area is still very high and Ahmadis who by faith always remain loyal and faithful to the country fear for their lives.

Once again, we appeal to the international community to caution Pakistan to honour its responsibilities towards all its citizens without any religious
discrimination and refrain from trampling upon the fundamental and universalrights of all its nationals and restore freedom of faith and practice to Ahmadis in Pakistan. The damning State sponsored persecution of Ahmadis must stop for Pakistan to be counted as a respectable democracy by the world community.