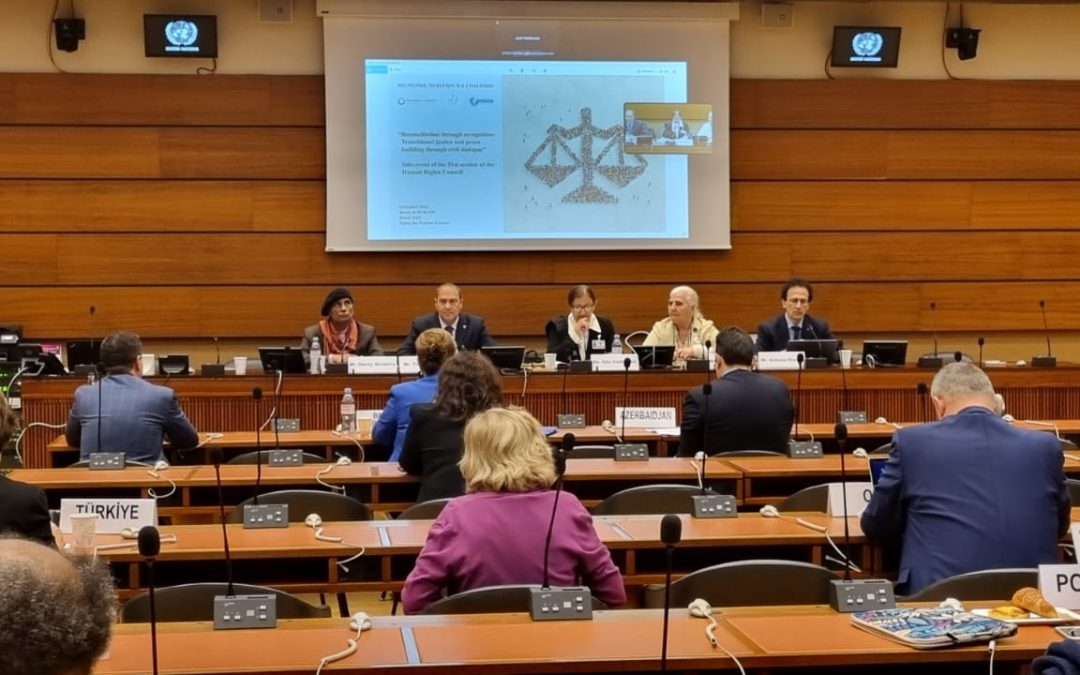 Normally, it is the States and their governments that are the deciders and practitioners of conflicts as well as finding the solutions, the role of the civil societies is often invisible in such development. NGO organisations tirelessly work to create the conditions that pushes international institutions and States to set aside their entrenched views in conflicts and move towards peace through give and take process.

A very good example of such effort is the recently held conference in Geneva at the 51st Session of the UN HRC which was arranged by “Recognize to reconcile Initiative” to advance the cause of justice and peace to prevail between Armenia and Azerbaijan, in the South Caucuses and the world at large.

The conference not only discussed the importance of recognition of the historical wrong doings that happened in Khojaly- Nagorno-Karabakh in 1992 but also encourage governments and leaders of public opinion in both countries to consider application of transitional justice mechanisms in their post-conflict normalization agenda.

The eminent speakers from various European human rights organisations, like Gyorgy Tatar, Director of the Budapest Centre of MAP, Thierry Valle, Director of the CAP- Freedom of Conscience, Antonio Stango, President of the Italian Federation for Human Rights and Bashy Quraishy, Secretary General of the European Muslim Initiative for Social Cohesion (EMISCO) addressed the event.

The main speaker was Ms. Munira Subasic, President of Association Mothers of Srebrenica whose life story and first-hand experience of Bosnian Muslims massacres touched every participant. The main emphasises of all the speakers was to encourage Armenia to properly recognize Khojaly massacre and offer a public apology to its victims but they also requested Azerbaijan to open public space for direct dialogue on the issue at hand between the civil societies of the two countries because it would be an important cornerstone for reconciliation efforts.

This conference appreciated the fact that leaders of Armenia and Azerbaijan have recently announced their willingness “to turn the page” and start “era of peace in the region”.

The organisers believe that it is time for a strong international mediation, first on civil society level, to end the impunity and silence, render justice for Khojaly but also to help communities in both countries to overcome the shadow of the tragedy through recognition, dialogue, and ultimate reconciliation.

On behalf of the coalition, Thierry Valle requested the NGOs and activists with expertise on transitional justice, human rights, and peacebuilding to join the coalition because by doing so, they would not only be extending their valuable expertise and help to achieve objectives of “Recognize to reconcile” initiative but would be partner in advancing its noble cause of Justice and Peace to prevail between Armenia and Azerbaijan.

The conference was attended by various ambassadors, including Armenia and Azerbaijan as well as NGO representatives, media, and conflict resolution experts.

For more information regarding the initiative, we can be contacted at : contact@coordiap.com