UPR : The Russian Federation and Religious Freedom : The hidden factor behind the bad religion concept 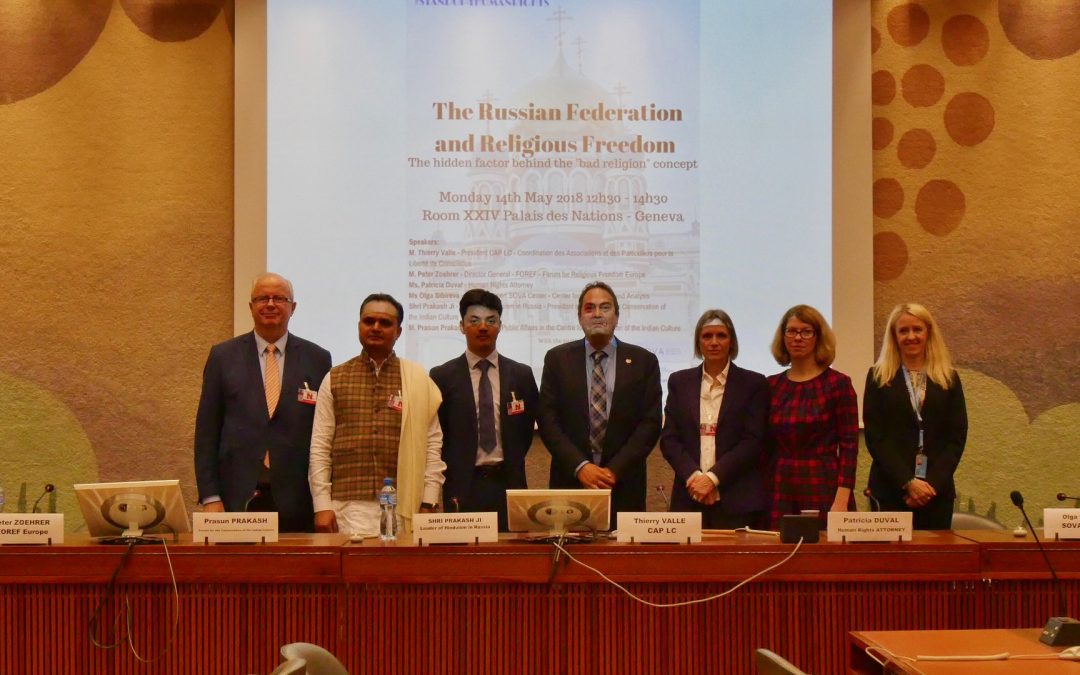 The 14th May 2018, on the occasion of  the 30th session of the Universal Periodic Review  at the United Nations (Geneva), the  french NGO with United Nations Consultative Status, the Coordination of the Associations and the People for Freedom of Conscience (CAP LC) organised an event on the topic the Russian Federation and Religious Freedom . It was focused  on the activities on the anti-cult organisations in the Russian Federation and the consequences on religious freedom.

To enlighten this concern, Thierry Valle, President of CAP LC had the honnor to present five Human Rights and Religious Freedom experts: civil society formation dedicated to defending the freedom of religion in accordance with international law.

He highlighted the European roots of the FECRIS and its funding by French government. He exposed the armful activities of the FECRIS in Austria to illustrate the “modus operandi” of such anti-cult association.

He explained how this model was duplicated in Russia with the propaganda of the vice-president of the FECRIS M. Dvorkin and that was at the origin of the deterioration of the Religious Freedom in Russia.

The consequences of this propaganda were dramatic since they initiated raids and arrests of religious minorities’ members throughout the territory and this constantly increasing.

He concluded his presentation by this quote of Mahatma Gandhi : Madame Patricia DUVAL, an international attorney at law, expert in religions and in human rights issues drew attention to the Role of FECRIS and Anti-Cult Organization in Russia :

– The Federation of Centres of Research and Information on Sectarianism (FECRIS)

In spite of its public financing by the French secular Republic, FECRIS has a Russian Vice-President, Alexander Dvorkin, who belongs to the Russian Orthodox Church and “fights” against targeted religious minorities he sees as competitors to the Orthodox faith.

He is the most infamous anti-sect activist in Russia and the Commonwealth of the Independent States (CIS). His militant activities are relying on the Spiritual Security concept, as defined by the Putin administration in 2000.

The FECRIS Vice-President has been engaged in hate speech and disparagement against so-called “sects” for over twenty years, accusing religious minorities of being “foreign agents” acting as enemies to Russia. Dvorkin has fueled suspicion and prejudice against the Mormons, Hare Krishna devotees, New Pentecostals, Falun Gong members, Jehovah’s Witnesses, Scientologists and others, leading to repression such as banning, imprisonment and incitement of hatred that leads to physical violence, threats, vandalism and similar aggression.

Dvorkin is also President of the Saint Ireneus of Lyons Centre for Religious Studies, the FECRIS member association in Russia.

On the advice of this anti-sect network, families who disagree with the choice of one of their relatives to adhere to a non-traditional religion take them to so-called “rehabilitation centres” held by Orthodox priests where these followers of minority religions are induced under pressure to recant their faith and return to the Orthodox fold.

This approach recalls the criticized “deprogramming” which has been found to be illegal and to violate followers’ right to freedom of religion or belief:  “No one shall be subject to coercion which would impair his freedom to have or to adopt a religion or belief of his choice” pursuant to Article 18.2 of the International Covenant on Civil and Political Rights. This right is also protected under the European Convention on Human Rights. “For many years, the level of xenophobia in Russia has, sadly, remained high. The most discriminated believers are people from non-Orthodox Christian denominations and new religious movements. A significant number of Russian citizens view them as “cults.”

Some participants of the battle against so-called “cults” hold degrees recognized in Russia, and work in respected educational institutions. Moreover, they have the power to directly influence the state officials’ decisions about religious organizations, because some of them are the member of public councils at the various state agencies. Most of them assess religious movements from the point of view of the Russian Orthodox Church and translate the positions of the Russian Orthodox Church regarding new religious movements.

Sometimes they write expert opinions in court proceedings related to religious organizations.  There are cases when on the basis of such expert opinions religious organizations were liquidated. These experts act based on both ideological and capital interests, but have a single goal: to explain to the public that followers of certain faiths are dangerous, and that “spiritual safety” is worth the sacrifice of constitutional principles.

In recent years the battle against “cults” in Russia has become a part of state politics. In fact, the officials replaced the “sects-fighters”. The officials use the more effective tools to put religious minorities under pressure. Banning the center and local religious organizations of Jehovah’s Witnesses as extremist has become the most massive repressive action against believers of the entire post-Soviet period. Amendments from the Yarovaya-Ozerov Package of laws that restrict missionary activity are still actively used with respect to new religious movements and Protestant organizations. But the state needs to justify the necessity of such actions, so the experts who are famous for their “anti-cult” positions can be called by authorities any moment.” Shri Prakash Ji , Leader of Hinduism in Russia and President of the Centre for the Conservation of the Indian Culture shared his testimony on the harassment suffered by him and its family from the ultra-nationalist and extremist orthodox Christian, Alexander Dvorkin since the year 2015 :

“Dvorkin has been spearheading the campaign against Hinduism since the Bhagavad-Gita case seven years ago and the attacks on Shri Prakash Ji are aimed at reducing the popularity of Hinduism in Russia in order to achieve a monopoly state for the Russian Orthodox Church.

Anything but research goes inside Dvorkin’s organization that has used all infamous methods known by humanity to scare and threaten Shri Prakash Ji and his family. Slander on his internet forum iriney.ru, fake TV reports, unauthorized police raids, phone and email threats, nationalist hooligans are just to name a few.”

Mister Prasun Praskha, Director of Public Affairs in the Centre for the Conservation of the Indian Culture. His speech highlighted the following important points: 1) The connections of Dvorkin with the police and courts in Russia;

2) The use of agents by Alexander Dvorkin;

3) The use of ultra-nationalist groups by Dvorkin’s organization;

4) The unauthorized police raid that happened on the 2-nd of November;

5) The threat they faced to their life inside the police department;

6) The fact that the embassy works only when pressurized;

7) Sending of goons to their house every once in a month;

8) The moral terror tactics of Dvorkin;

9) Demands towards UN and the International community.

Speaking of demand towards the UN, they were as given in the list below: