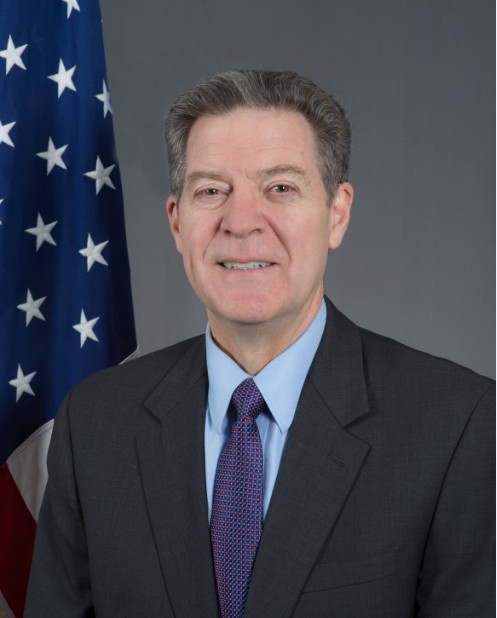 “I am concerned, obviously, for what’s happening in France,” Ambassador Sam Brownback told reporters when asked about Macron’s initiative.

“There can be constructive engagements that I think can be helpful and not harmful.

“When you get heavy-handed, the situation can get worse.”

Macron has ordered a crackdown on extremism amid shock in France over the October 16 beheading of a teacher who showed pupils cartoons of the Prophet Mohammed and the stabbing to death of three people in a church in Nice on October 29.

Under the initiative, France — which is avowedly secular and home to Europe’s largest Muslim community — will shut down mosques if they are found during inspections by authorities to be promoting extremism.

Brownback condemned violent expression of religion but said: “If you’re peacefully practicing your faith, you’re entitled to practice that faith.”

“We think that countries do best when they work with religious leaders on identifying concerns and problem areas and not get into disagreements with religious groups,” Brownback said.

“They have their fundamental religious freedom rights and those need to be honored and protected by the government.”

Macron’s efforts have triggered protests in several Muslim-majority countries, with the leaders of Turkey and Pakistan alleging that France is attacking Islam as a whole.

Defenders of Macron have accused his critics of hypocrisy, pointing to severe repression of religious faith elsewhere in the world.

On a more subtle level, Macron has been upset by the tone of media in the English-speaking world, saying that its journalists fail to understand the French pillar of “laicite,” or secularism.

“When I see them legitimizing this violence, and saying that the heart of the problem is that France is racist and Islamophobic, then I say the founding principles have been lost,” Macron told The New York Times last month as he took issue with its coverage.

The New York Times in a recent editorial rejected the notion that it in any way justified terrorism and noted that French media have not spared the United States from critical reporting.

The media have a “function and duty to ask questions about the roots of racism, ethnic anger and the spread of Islamism among Western Muslims, and to critique the effectiveness and impact of government policies,” it said.

The United States is also secular but emphasizes the freedom to practice faith rather than curbs on the role of religion.

President Donald Trump sent shockwaves in his first campaign for vowing to bar Muslims from the United States and promptly after taking office he restricted visas for citizens of a number of Muslim-majority nations.

Religious freedom has nonetheless been a priority for the Trump administration, which counts on evangelical Christians as a base and has often been low-key about raising other rights issues, particularly with allies.

Brownback, a former senator widely respected by human rights advocates, had led the religious freedom diplomacy and been outspoken in defending the rights of Muslims, including in China’s Xinjiang region where an estimated million-plus people are incarcerated.

Brownback was speaking as he rolled out annual State Department designations of “Countries of Particular Concern” on religious freedom, with Nigeria added for the first time.