The World Summit brings together experts from the fields of medicine, law ,politics, media and social sciences to unmask the truth about these transplant crimes and discuss how the global community can act to stop them. Forced organ harvesting is an unethical and illegal yet highly profitable practice where vital organs are removed from non-consenting, healthy people and sold to patients in need of transplantation. For over two decades, the Chinese Communist Party has mobilized the entire state apparatus to monetize the bodies of those deemed undesirable and turn medical professionals into executioners. The primary victims of forced organ harvesting are Falun Gong prisoners of conscience, killed on demand for their organs. Designed as a series of six webinars, the World Summit demonstrates how forced organ harvesting affects all aspects of human society. The medical profession’s oath to do no harm has been sacrificed for profit, career, and political goals. Politicians and policy makers are torn between the wellbeing of their constituents and special interests. Many members of the news media have failed to report truthfully on this atrocity but bowed to CCP pressure and published paid propaganda instead. Societies around the world are kept ignorant of the dangers of becoming complicit with forced organ harvesting crimes. The legal profession is called upon to enact an end to this unacceptable crime against humanity.

The failure of ethical oversight by medical societies and governments in any country is a violation of, and a threat to, international medical ethics worldwide. Organ harvesting from non-consenting prisoners of conscience is a corrupted violation of medical ethics. The medical profession betrays its guiding principles and vows by choosing expediency and financial gain over serving the best interest of both patients and the victims who are killed so that patients may live. Every medical doctor in the world must make a personal choice at the crossroads of atrocity and ethics.

Politicians at both local and international levels will address the implications and consequences of collaboration between their countries and China and the subject of national sovereignty. At the core of this session is advocacy, sharing information, and defense of human values and ethical norms.

The media session will address how journalists regard freedom of the press, censorship and suppression of information. The failure of mainstream media to report on China’s forced organ harvesting has had a negative impact on the dissemination of information and knowledge to the public, and on the credibility of valid research and investigations of this human rights violation.  The World Summit will further elaborate on the impact and broad implications that forced organ harvesting has for civil society. Human rights atrocities, as part of a planned cold genocide, affect not only the victims and perpetrators, but all of human society.

In the final session of the World Summit, policy makers and parliamentarians from local and international levels will discuss proposals and steps to effectively combat transplant abuse and prevent forced organ harvesting from living persons. 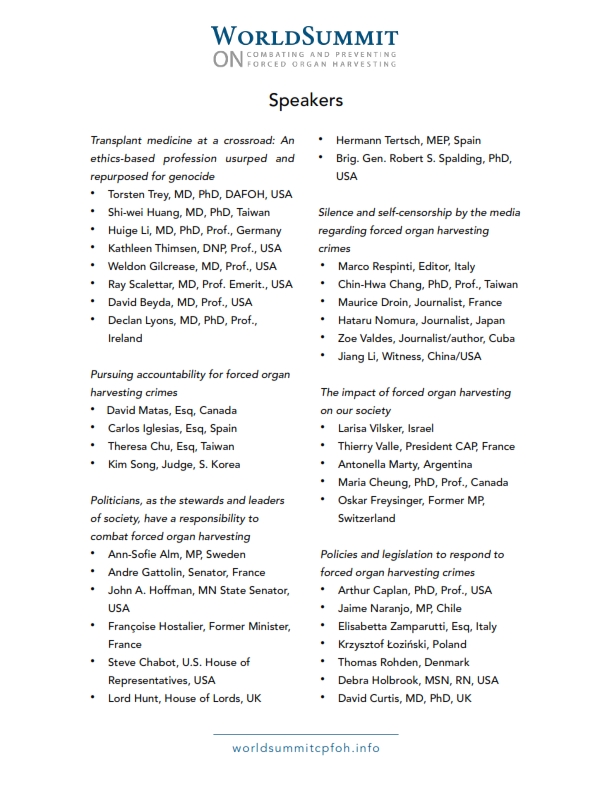 World Summit against Forced Organ Harvesting: An Alarm for Humankind