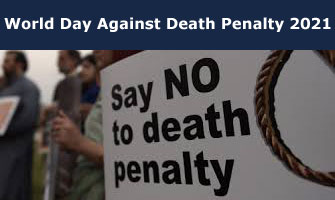 WASHINGTON, D.C., 08 OCTOBER 2021 – Leading up to the World Day Against Death Penalty 13 human rights organizations promoting freedom of religion or belief call on the 13 countries who have death penalty provisions for the non-violent conduct of apostasy or blasphemy to repeal those laws.

The letter, sponsored by 13 diverse religious and non-religious groups, appeals to the Secretary General of the Organisation of Islamic Cooperation [OIC] – as all the countries that provide for the death penalty for apostasy and/or blasphemy are members of the OIC. The letter urges the Secretary General to call on OIC member states to uphold their human rights standards – to walk the talk  – in regards to the statements they have committed to, by repealing the death penalty for apostasy and blasphemy, saying that,

“While OIC states have condemned the actions of ISIS and have called on the Taliban to protect the ‘right to life and security […] in accordance with human rights treaties’ over ten of these states have penal codes […] which indirectly support the ideology and actions of the terrorist groups the OIC has publicly committed to combat.”

Whereas state-sanctioned sentences are rarely carried out the UN Secretary General has shared that even where a moratorium is in place these laws have a “chilling effect” on freedoms of “religion, expression, association and assembly.” The Special Rapporteur on freedom of religion or belief has also highlighted that where such laws exist it encourages vigilante mobs or zealots to murder those alleged to have violated those laws even when states themselves do not carry out the death sentence or have a moratorium in place. The laws also justify the prolonged arbitrary detention of those who leave Islam, hold dissenting view or belong to minorities.

In Nigeria authorities continue to detain humanist Mubarak Bala despite a Federal Court ruling calling for his release, Nigerian authorities also detain Sufi singer Yusuf Yahaya on death row. In Pakistan, over 40 individuals languish in prisons under blasphemy charges where they are denied the right to a fair trial, including mentally disabled Stephen Masih, a Christian man. In Saudi Arabia authorities detain blogger Raif Badawi on charges of apostasy for creating a platform for religious discourse and challenging extremist views. In Yemen, both the Houthi rebels and government authorities have detained individuals on the grounds of their conversion to Christianity. In the Islamic Republic of Iran, police authorities and judges use the death penalty to threaten, harass, and arrest those who leave the state religion, including Christian converts, atheist exMuslims, and others; and even execute them covertly under extraneous bogus charges to avoid international attention.

The civil society letter notes steps taken by the OIC to address allegations of apostasy within Muslim groups but clarifies that “this action plan needs to be expanded to non-Muslims [and Ex-Muslims]” and “address the removal of the death penalty for apostasy or blasphemy specifically.” The letter also calls on the OIC to work with “leading legal scholars of the Sharia schools of law to renounce the death penalty for these offences.”

The letter comes just as Monash University Law releases a comprehensive report, “Killing in the name of God”, documenting the legal structures in the countries which still have provisions of the death penalty for apostasy or blasphemy. The report critically describes and examines, “State-sanctioned killings on the basis of religious offending and religious identity,” in the 12 countries that retain the death penalty for offences against religion. The Special Rapporteur on freedom of religion or belief summarises the report as a “scathing indictment of overreach of criminal law, where State power is wielded to kill individuals for offending religious doctrines.”

The report describes the death penalty in these countries as, “the tip of the iceberg” and describes how extrajudicial executions and killings by extremist groups, “demonstrate how many states remain complicit in the killing of those deemed to have offended religion, whether by words, actions, or association.”

The civil society groups conclude the letter by expressing their commitment to see the repeal of these laws through and urge the Secretary General to follow Sudan’s lead – it repealed its apostasy law in 2020 – and to take actions promptly as, “promoting the right to life and dignity can never come too soon.”