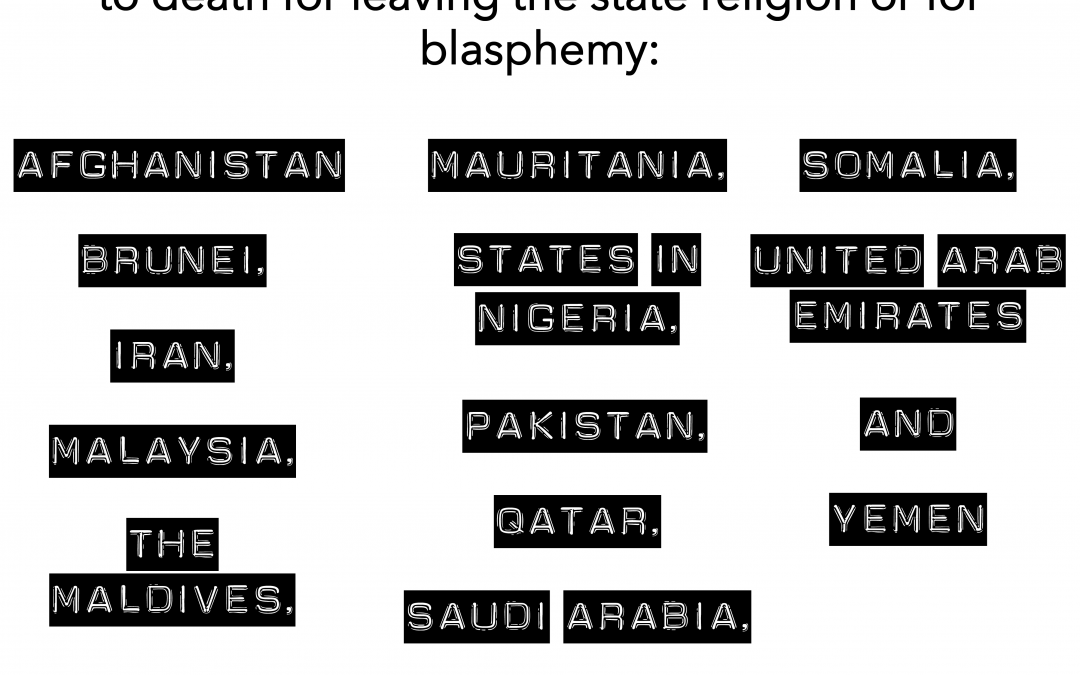 World Day Against the Death Penalty is on the 10th October.

As the World Day Against Death Penalty is on the 10th October over 10 countries still have the death penalty for apostasy or blasphemy.

Sixteen organisations, Including CAP Freedom of Conscience, from different faiths and none, have submitted a letter to all UN member states urging them to take immediate steps to address this and to protect fundamental freedoms, including religious freedom, freedom of expression, and the right to adopt, leave or change their religion or belief.

The death penalty, even when not applied, is used to pressure individuals to recant and to not practice publicly. One ex-Muslim described the laws as being a constant, “sword over our throats.” The UN Secretary General has noted this concern saying that even where a moratorium is in place the laws have, “a chilling effect on the legitimate exercise of human rights.”[2]

The death penalty for apostasy and blasphemy has also been shown to incite violence by non-state actors against those who leave or question the religion. The UN Special Rapporteur on freedom of religion or belief has said, “where domestic laws provide for the death penalty for religious offence, it is more likely that the existence of such laws will encourage vigilante mobs or zealots to murder those alleged to have violated those laws.” The most recent example was in July 2020, when a man shot dead Tahir Ahmed Naseem, who was on trial for blasphemy in Pakistan.

The hope is that this effort will increase the pressure on countries to repeal their laws on the death penalty for apostasy and blasphemy following Sudan’s repeal this year, and further expedite countries’ full compliance with international human rights standards including the freedom of expression, and the right to adopt, leave or change religion or belief.

[2] UN Human Rights Council, Annual report of the United Nations High Commissioner for Human Rights and reports of the Office of the High Commissioner and the Secretary-General, Capital punishment and the implementation of the safeguards guaranteeing protection of the rights of those facing the death penalty, A/HRC/42/28 (28 August 2019), available from undocs.org/en/A/HRC/42/28.

Joint statement led by Australia on the death penalty as a punishment for blasphemy and apostasy, 9 March 2021