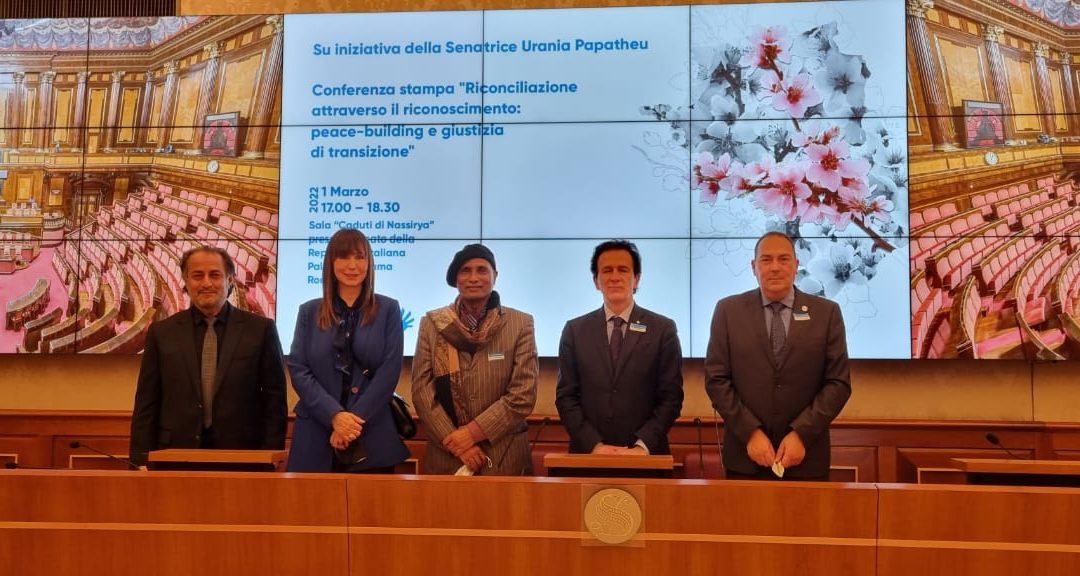 First of all I would like to thank the organisers, the Eurasian Association for International Development, EMISCO and the Italian Federation for Human Rights for inviting me to this conference.

CAP Freedom of Conscience is a secular European NGO with United Nations Consultative Status, created in 1995 and dedicated to protect the Human Rights and combats all forms of discrimination by alerting European and International bodies.

We collects testimonies of discrimination and human rights violations affecting communities in order to disseminate them to international bodies such as United Nations, OSCE, European Parliament, and in order to raise awareness and inform them as well as to generate debate on the protection of the Humans Rights.

We also have many partners with whom we collaborate in European bodies such as EMISCO which is co-organising today’s conference.

This year marks the 30th anniversary of the Khojaly massacre of civilians, and over the past 30 years there have been many peace initiatives to ensure that the massacre is properly recognised. It has been described by Human Rights Watch as “the largest massacre in the conflict” in Nagorno-Karabakh.

All previous peace initiatives have failed. Like the creation in 1992 by the predecessor of the OSCE of the MINSK group (co-chaired by France, Russia and the USA) which was intended to be a mediator and which ended up being more concerned with the possible spread of the conflict to other regions than with finding a peaceful solution to the Nagorno-Karabakh conflict, despite the dozens of peace plans proposed by the MINSK group since then until today.

In parallel to these peace initiatives, several international bodies have been working on this problem in order to find a solution:
The UN has adopted several resolutions ruling on Azerbaijan’s sovereignty over the region:
Resolution 822 adopted by the Security Council on 30 April 1993:

reaffirms “that the sovereignty and territorial integrity of all States in the region must be respected,”

reaffirms “also the inviolability of international borders and the inadmissibility of the use of force for the purpose of territorial acquisition,” and

expresses “its support for the ongoing peace process in the framework of the Conference on Security and Co-operation in Europe and its deep concern about the damaging effect that the intensification of armed confrontation may have on this process,” and

“demands the immediate cessation of all hostilities and acts of hostility in order to achieve a durable ceasefire, as well as the immediate withdrawal of all forces occupying the Kelbadjar district and other recently occupied areas of Azerbaijan;”

In 2008, the UN General Assembly adopted resolution 62/243 calling for “respect and support for the sovereignty and territorial integrity of the Republic of Azerbaijan within its internationally recognized borders, demands the immediate, complete and unconditional withdrawal of all Armenian forces from the occupied territories of the Republic of Azerbaijan and reaffirms the inalienable right of persons expelled from these occupied territories to return to their homes, stressing the need to create conditions conducive to their return.

Finally, the European Court of Human Rights (ECHR), in its judgment of 16 June 2015, noted the illegal intervention and presence, under international law, of the Armenian army on the territory of Azerbaijan.

The manipulation of memory and information: an obstacle to peace.

The case of France

This tragedy has also cast a serious psychological shadow on collective memories, creating an obstacle to the fragile attempts at reconciliation between Azerbaijan and Armenia undertaken by the international community.

The situation is made even more opaque and perhaps even intentionally so by the French media and politicians in order to serve other more personal interests.

It can be assumed that the strong Armenian presence in France exerts a strong influence on the French public.
The French Armenian diaspora is a very well organised community of 700,000 people.

Indeed, the French Armenian diaspora is a very well organised community of 700,000 people, which includes numerous personalities and powerful media outlets. Electoral ulterior motives are not without influence in the way French elected officials position themselves on the Nagorno-Karabakh issue.

The conflict is often wrongly presented as that of a Christian country against a Muslim country, whereas France’s attachment to secularism could, on the contrary, encourage it to support the first secular country in the Muslim world, Azerbaijan.

In November 2020 His Excellency Rahman Mustafayev, Azerbaijan’s ambassador to France, wrote in an open letter to the French media about the bias and misinformation spread in the mainstream media about the conflict between the two nations:

“A war has been going on for six weeks in Karabakh and its surrounding regions, thousands of people (civilians and military) have lost their lives but the French public opinion still remains misinformed about this conflict. In the torrents of inaccuracies, approximations and errors, three gross untruths hold the prize for disinformation: the so-called “belonging of Karabakh to Armenia”, that of Stalin’s alleged arbitrary decision to “attach Nagorno-Karabakh to Azerbaijan”, and finally the fable of the “war between Muslim Azerbaijanis and Christian Armenians”.

Ms Kamala Murad in her book “Armenia-Azerbaijan Conflict Beyond Good and Evil?” published in November 2021 makes the same observation about the bias of French political and media elites to present the conflict from the Armenian point of view only.

The first vital step towards reconciliation for a lasting peace between Armenia and Azerbaijan is the recognition by both sides of the abuses committed during the conflict.

This was a major step in the progress of the peace process in several conflicts, such as the recognition of the Srebrenica massacre, which was interpreted as a first step for the reconciliation of the whole region by the European Union authorities.

We can also cite emblematic examples from history such as

– the recognition of the massacre of Polish officers by the Red Army in Katyn in 1940 by the Russian government in 2010,

– as well as the Franco-German reconciliation after more than a century of conflicts that led to the two world wars. And it is on the basis of this reconciliation that today’s Europe has been built.

As we have seen, a peace process can only be initiated on a sound basis, free of all external influences and with the will to achieve a lasting peace.

Unfortunately, in this conflict, we can see that foreign powers with their own internal and external political interests are sometimes intrusive and pulling the strings. These interventions have a negative influence on the peace process and very often fuel the conflict rather than calm it down.

One example is the presence of the Russian army deployed on Azeri territory for a peacekeeping mission following the ceasefire, which gives Russia the opportunity to re-enter Azerbaijan.

We have been able to establish another major obstacle to the peace process, namely the partiality of the mediating countries, which are supposed to remain neutral, especially those that chair the MINSK group and should guard against lobbies.

This is again the case of France, which does not respect this neutrality, being present on 8 February with all the French political class including the Prime Minister (present in place of President Macron) at the annual dinner of the Coordination Council of Armenian Associations of France.

To remedy the various obstacles to the peace process that we have just identified, here are some measures that could be implemented:

It would be wise for the peacekeeping mission to replace the Russian army by a contingent of Blue Helmets.

It would also be the role of NGOs to report to the relevant institutions (UN, OSCE, European institutions …) the failures of the states involved in the peace process to be impartial.

NGOs should also be involved in the fight against disinformation and censorship by reporting first-hand on events and making them known to the general public.

In conclusion, it seems vital that all the conditions we have just outlined be met so that a lasting peace can be established between Azerbaijan and Armenia.

11/03/2022 : Peace building through mutual recognition, justice and dialogue is the only way forward