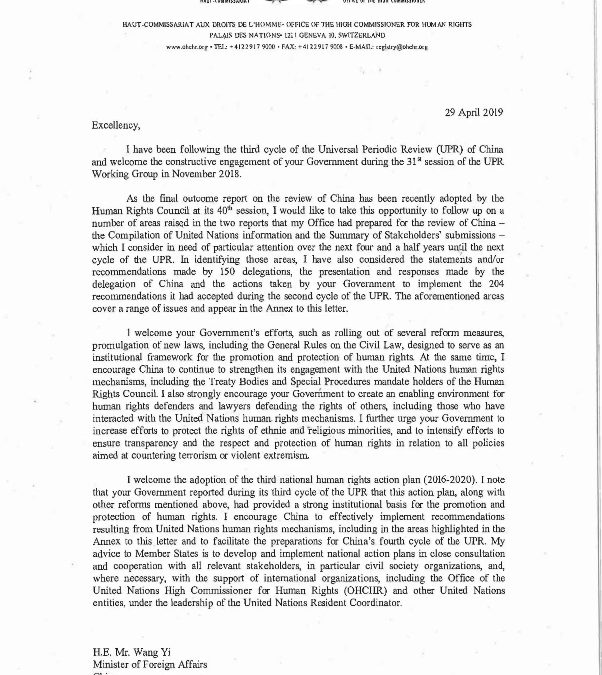 The letter that the UN High Commissioner for Human Rights sent to the Minister of Foreign Affairs of China in order to highlight areas requiring particular attention over the next four and a half years – prior to the fourth cycle of the UPR of China.

29 April 2019
Excellency,
I have been following the third cycle of the Universal Periodic Review (UPR) of China and welcome the constructive engagement of your Government during the  session of the UPR Working Group in November 2018.

As the final outcome report on the review of China has been recently adopted by the Human Rights Council at its 40th session, I would like to take this opportunity to follow up on a number of areas raised in the two reports that my Office had prepared for the review of China – the Compilation of United Nations information and the Summary of Stakeholders’ submissions – which I consider in need of particular attention over the next four and a half years until the next  cycle of the UPR.  In identifying those areas, 1 have also considered the statements and/or ,  recommendations made by 150 delegations, the presentation and responses made by the delegation of China and the actions taken by your Government to implement the 204  recommendations it had accepted during the second cycle of the UPR. The aforementioned areas cover a range of issues and appear in the annex to this letter.