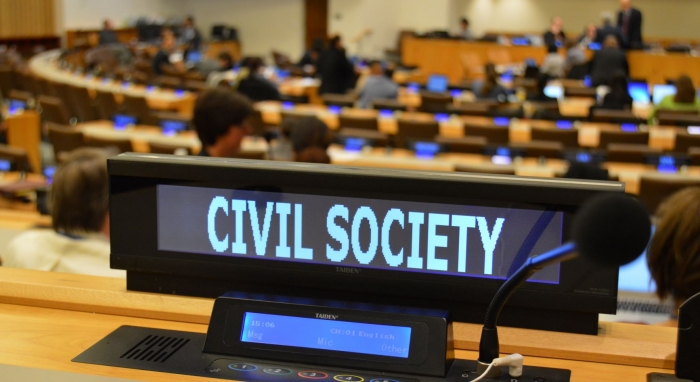 (Remarks prepared for a side event on religious freedom during the 43th session of the Human Rights Council, organized by CAP Freedom of Conscience, March 4, 2020, Palais des Nations, Geneva, Switzerland)

Several years ago, we learned about the unprecedented practice of forced organ harvesting where dissidents were killed for the purpose of harvesting their organs for profit. Such abuses constitute crimes against humanity. However, if such practice is aimed at members of the same religious group, then we need to consider that there is intent to weaponize the medical discipline of transplantation for the purpose of destroying said group. Article II of the Rome Statute recognizes genocide if members of a religious group are killed, or their bodies seriously harmed, with the intent to destroy the group in whole or in part.

We need to shift gears in our thinking and acknowledge that systematic, large-scale, state-organized forced organ harvesting is as lethal as execution by guns or gases. Today we will talk about the nefarious method of using the well-intended discipline of transplantation medicine as an instrument to commit genocide and explore methods that have been used to cover up these crimes against humanity.

We will discuss the case of Falun Gong practitioners who have been persecuted for over 20 years in China for their faith. They suffer from a slow-moving, cold genocide under indifferent awareness from the United Nations and seemingly willful blindness from much of the world. The victims are calling for help and justice, and we are here to give them a voice.

Falun Gong is a peaceful Buddha-Qigong cultivation practice that was introduced in China in 1992. In the West, the practice is also considered a religion. It is based on the universal principles of Truthfulness, Compassion and Tolerance and includes the daily practice of five simple Qigong-like exercises. Soon after its introduction, the Falun Gong practice became very popular and within seven years there were an estimated 70-100 million Falun Gong practitioners in China. Chinese citizens were quickly drawn to this practice as it is based on ancient Taoist and Buddhist teachings and the traditional values that were destroyed during the communist government’s Cultural Revolution.

At the 1992 Beijing Qigong exhibition, Falun Gong was given the prize for best new Qigong, and in 1993 the Falun Gong practice received another prize. It is noteworthy that the teachings and five exercises were freely available to anyone. Due to the revival of ancient values coupled with significant health improvements and the positive changes in people’s moral values, Falun Gong came to be highly appreciated by the Chinese population. Many experienced or witnessed improvements in health and well-being. The Chinese government even recognized that Falun Gong was useful because it saved the country about 1,000 Yuan per person in health expenses annually.

The objective of a case study is to learn from its details and then to extrapolate it to other situations. If the purpose of such a learning process is to prevent other religious persecution, then we must direct our attention to the beginning of the persecution and the first steps of suppression.

On June 17, 1996, the Guangming Daily, one of the major state-owned newspapers in China, published an editorial that slandered Falun Gong yet providing no substantiating evidence. In response, Falun Gong practitioners, used to following the principles of Truthfulness, Compassion and Tolerance, sought to rectify the lies and tell the truth about their practice and faith. Shortly afterwards, on July 24, 1996, the Propaganda Ministry issued an internal order to news and publishing bureaus across China to forbid the publication of Falun Gong books. Today, we know from the past, whenever books are burned and destroyed, it should trigger an alert.

Then, in July 1998, the Police Ministry’s First Bureau, which is responsible for political security, issued Policy 1998-555. Under the title “Notice on Launching an Investigation into Falun Gong”, this policy falsely labelled Falun Gong as a cult and ordered subordinate officers to identify evidence to support the claim. What did this mean? Investigations were needed to manufacture reasons that would justify ostracizing the group, and the labelling as a cult occurred even before any evidence was collected. The religious persecution of Falun Gong began quietly.

What is often missed in the context of hate propaganda and state-directed misinformation campaigns is that it is not only the ostracized group of people victimized, but also the entire populace. By creating falsified news reports and misinformation about Falun Gong, the Chinese people have been deprived of their freedom to learn the truth about the peaceful elements of Falun Gong. In essence, the religious persecution does not only deprive religious adherents of their freedom to practice their faith, but has deprived all Chinese people of the freedom to learn and practice Falun Gong.

In April 1999, an incident occurred that led to an escalation of the persecution. After defamation by a local newspaper, Falun Gong practitioners sought to rectify the false reporting by talking with employees of the newspaper. A group of 300 armed police then attacked the practitioners and incarcerated 45 of them. When otherpractitioners asked for their release the police said that they should go to the Appeal Office in Zhongnanhai in Beijing. The Chinese law allows citizens to make appeals to the government, so practitioners went to the Appeals Office in Beijing to ask for the release of the arrested practitioners and the reinstatement of a normal, peaceful environment in which they could practice their religion.

Spontaneously, by word of mouth, several thousand practitioners from many different regions converged on the appeals office in Beijing. The police at the appeals office then suggested in view of the large number of practitioners that they should spread out along the street opposite the office. The law-abiding practitioners followed the instructions and stood in line around the building. Later, the propaganda ministry has framed this waiting line of Falun Gong practitioners as a “large-scale demonstration,” completely omitting that it was the local police who had asked the practitioners to stand in line across the street. From this incident, we should learn that falsified reporting by news media and framing by official institutions can be alarm signals for imminent, religious persecution.

After this April 1999 incident, the persecution accelerated and escalated. The former secretary general Jiang Zemin stated on April 25ththat, in fear of losing power over the Chinese people, the Falun Gong movement represented an ideological threat to the Communist Party and should be rapidly destroyed. He wrote in a letter, “Can the Marxism, Materialism, and Atheism that we Communists have really not win over the theory that Falun Gong advocates? If that were true, it would be a real joke!”

On June 10, 1999, a Gestapo-like security agency, named for the date of its creation, was established with broad reaching powers nationwide. Shortly afterwards, on July 20th, 1999 Falun Gong was officially banned and Falun Gong practitioners were arrested across China. All media outlets and television reports in China began to announce the ban 24 hours a day. The crackdown on Falun Gong was supposed to suppress the practice within three months, using harassment and defamatory propaganda to dissuade Falun Gong practitioners and force them to abandon their faith. But after three months, Falun Gong was not eradicated.

More intense measures of persecution, such as brain washing and torture, were gradually implemented. Torture deaths were authorised and framed as “the inmate has committed suicide.” The lack of retribution for these crimes opened the door to any form of abuse that the police wished to inflict. Pushed by the 610 Office, financial or political incentives to “transform or eliminate” as many Falun Gong practitioners as possible led the police to go beyond what is legally allowed in Chinese prisons, leading to dehumanisation and loss of human dignity. Any form of persecution was permissible, no matter how illegal, perverse or inhumane, to destroy Falun Gong believers. The list of barbaric torture methods is long and gruesome.

At a Beijing meeting in November 1999, the head of the 610 Office, Li Lanqing, announced Jiang Zemin’s directives to completely eradicate Falun Gong to a group of 3,000 officials, stating, “ruin their reputations, break them financially, and destroy them physically.”

Once the boundary of basic human rights was crossed, the escalation of the persecution and the eradication of Falun Gong became a primary goal of the CCP. Once the respect for human dignity was lost, it took only a small step to cross the borderline between religious persecution and policy-motivated killing for profit. Instead of simply torturing practitioners to death, the practice of forcibly harvesting the organs from living Falun Gong prisoners of conscience began.

Tens of thousands of blood tests and medical exams were forced upon detained Falun Gong practitioners, notwithstanding the obvious fact that it was not the health of the detained practitioners that was of concern to the prison guards, as they were the same ones who also carried out the torture. Other criminals and inmates were not subject to systematic medical exams and blood testing. Falun Gong was the sole target, and conducting systematic, widespread medical exams and blood testing expressed intent to obtain organs for retail sale.

In 2018, the China Tribunal, a people’s tribunals initiated by citizens to investigate a range of human rights abuses, investigated the evidence of forced organ harvesting and torture and other inhuman acts against the Falun Gong practitioners. After one year of investigation, hearing 50 witnesses and reviewing thousands of pages of evidence and counter evidence, the China Tribunal concluded:

“The Tribunal’s members are certain – unanimously, and sure beyond reasonable doubt – that in China forced organ harvesting from prisoners of conscience has been practiced for a substantial period of time involving a very substantial number of victims.”

In 2018, academic researchers examined the persecution of Falun Gong and found that it meets the criteria of a slow-moving, cold genocide. Falun Gong is targeted as a group. The sole purpose of the 610 Office is to persecute this group. Past remarks from leaders of the Chinese Communist Party have stated that they intend to destroy and eradicate Falun Gong. The actions of the Chinese state leave no doubt that the eradication of Falun Gong by any and all means is a goal of the CCP. The practice of forced organ harvesting is an instrument to achieve that goal.

After the student massacre in 1989, the world reacted in dismay, and the CCP became cautious. Cracking down on Falun Gong overtly was not an option as international reaction is unpredictable. Instead, a steady, concealed, and invisible eradication of Falun Gong practitioners, with the killing spread out over more than 20 years, has been a genocide moving in small, slow steps.

What do we have to learn from the 20 years of persecution of Falun Gong?

After more than 20 years of persecution, we must not watch, like detached bystanders, but have to recognize that what started as a quiet religious persecution has escalated into genocide.

The call for religious freedom, the right to freely practice one’s faith, is essential for human civilization. It not only allows members of a religion to freely practice their faith, but also allows others to learn and start practicing the respective faith.

Religious freedom is an expression of tolerance and living in peace. The Chinese Communist Party has demonstrated the opposite of tolerance and religious freedom. The CCP only allows one belief system, and that is to solely deify the Communist Party. As atheistic, anti-faith party, the CCP is committed to eradicating any faith, including Tibetan Buddhism, Christianity, Muslim, and Falun Gong.

Intolerance is the root cause of religious persecution. Herein is also embedded the solution and remedy. If all of us embrace what has been ostracized and persecuted by the CCP, if we embrace that Falun Gong is a morally upright spiritual discipline, we not only defeat the purpose of its genocide, but also secure our own religious freedom.