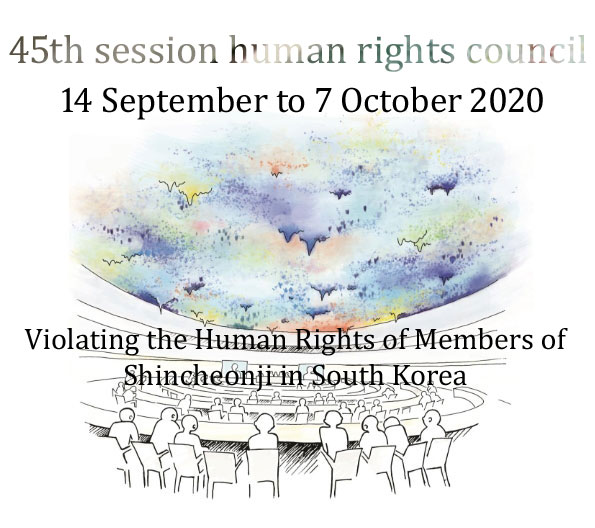 With the COVID-19 pandemic, substantial changes are happening in our societies. Some are positive, while others are extremely worrisome.

We would like to call the attention of the Human Rights Council on an extremely troubling situation in South Korea.

The South Korean authorities were widely praised for their management of the COVID-19 epidemic, even though some of the measures undertaken might have been objectionable elsewhere from the point of view of the protection of personal data and privacy. However, one specific situation, connected to the Shincheonji Church, is of particular concern for us.

On February 18, 2020, media around the world started broadcasting (not necessarily in an accurate way) the news that in South Korea a woman nicknamed  “Patient 31,” a member of Shincheonji’s congregation in the city of Daegu, had infected directly or indirectly thousands of members of her church by attending religious services. There is no doubt that this was a serious problem, and we could only praise South Korean authorities for taking the appropriate urgent measures.

Shincheonji should also be praised, as it took in turn rapid action. It stopped all its religious services throughout South Korea and even abroad, and put all its members into quarantine around the country, including those who had never been in contact with Patient 31 or any of the Daegu members. Its leader publicly apologized for the problems caused, its members tried to cooperate with South Korean authorities, and those of them who had been infected and had recovered massively donated blood plasma.

Unfortunately, the good will of Shincheonji and its cooperation with the authorities were not regarded as sufficient. The authorities had requested the full list of all Shincheonji members, first to Shincheonji leaders in Daegu and then to the national headquarters, including members abroad, and a list of the group’s real estate properties. While requesting a list of those who had attended services during the COVID crisis was reasonable, it is more difficult to understand why the authorities needed a list of all Shincheonji members, including those abroad who had never visited South Korea, and of all properties, included those not used for gatherings or religious meetings. Privacy laws protect fundamental human rights. They may be derogated in times of epidemics, but any exception should be reasonable and proportioned. Nonetheless, despite unreasonable demands from South Korean authorities, Shincheonji did as requested and supplied with the lists as complete as possible.

The leaders of Shincheonji are accused of having omitted 132 names from the initial list supplied in Daegu, although they were included in the national list supplied later, and to have omitted or supplied incorrectly some information about their members and properties such as registration numbers, dates of birth, and addresses, although even the Deputy Minister of Health admitted that the information supplied was substantially accurate, and discrepancies with respect with lists later seized by the police were but minor.

Based on these discrepancies, however, several leaders of Shincheonji were arrested, including its 89-year-old Chairman Lee Man Hee.

South Korean authorities also started civil actions against Shincheonji, asking the movement to pay for allegedly “spreading” the virus astronomical sums that would bankrupt it. At the same time, they “discovered” that both the missionary center of Shincheonji in Seoul and the humanitarian and peace organization HWPL (which is ECOSOC-accredited, is well-known internationally, and includes non-Shincheonji members although it is chaired by Lee) had allegedly breached their own by-laws and deserved to be dissolved; that Shincheonji’s places of worship had violated zoning regulations, so that all were and remain closed; that how the movement and its local branches organized their accounts was a form of tax evasion; that Chairman Lee had “embezzled funds” of Shincheonji for building the Palace of Peace in Goseong (which is not only his residence but also a main center of Shincheonji activities); and that Lee and his followers had organized events (before the epidemic) without the proper authorizations.

All this refers to the normal life of a religion, and to activities that Shincheonji has conducted for decades without objections. They were declared illegal and prosecuted after the COVID-19 crisis through a sequence of simultaneous criminal, administrative, tax, and zoning actions.

All this seems to go well beyond logic and truth. The real question here is not how effectively or ineffectively Shincheonji dealt with the pandemic. We are under the impression that the pandemic is used as an excuse to finalize the battle against this Christian new religious movement, which has been conducted for several years by those disturbed by its rapid growth, which largely happened at the expenses of larger and politically influential Protestant churches.

We are certainly not here to promote Shincheonji or its theology. We are here to express our deepest concerns about the human rights situation in South Korea, in particular, freedom of belief. The Universal Declaration of Human Rights signed and ratified by South Korea, guarantees the freedom of religion and belief, which includes the right to believe or not to believe in mainline as well as non-mainline religions, as well as the right to proselytize and persuade others to change their religion.

The UN Human Rights Committee, in its General Comment no. 22 to Article 18 of the Universal Declaration (1993) started that it viewed “with concern any tendency to discriminate against any religion or belief for any reason, including the fact that they are newly established, or represent religious minorities that may be the subject of hostility on the part of a predominant religious community.”

In the case of Shincheonji, the pending criminal cases seem to lack substantial grounds, and there are serious doubts about the possibility of a fair trial and of guaranteeing the right of self-defense to a group and a leader vilified by leading politicians and several media, in a country where courts side with the prosecution in more than 90% of the cases.

We are not only concerned about the rights of Shincheonji as a religious movement, and its leaders who are in jail, but also about the human rights of some 300,000 individuals who risk discrimination or persecution just for being members of that church. We have seen documents evidencing more than five thousand cases of harassment and discrimination against individual members of Shincheonji in South Korea since the Patient 31 incident. Many were bullied in schools and workplaces, or lost their jobs. In 82 cases, devotees of Shincheonji were denied medical treatment and drugs by hospitals and pharmacies just because they were members of the church. Two women died in suspicious circumstances, one in Ulsan Metropolitan City and one in Jeongeup, North Jeolla Province, “falling” from the windows of their apartments while discussing with their husbands, who had a history of hostility to Shincheonji and domestic violence. Apparently, the police believed the husbands, who told them that their wives had committed suicide. The infamous practice of deprogramming, i.e. of kidnapping members of Shincheonji and detain them until they agree to change their religion, which had a long history in South Korea, also continued, with 143 new cases since February 2020.

The South Korean public opinion in general has an exceptionally negative attitude towards Shincheonji, not because its leaders or members were convicted of any crime but because of the constant assault by biased media. At times, it seems that any reasonable public debate is impossible. Those who disagree with the dominant narrative are being accused of being  members of Shincheonji, including in parliamentary debates.

We call on South Korean authorities to abide by the country’s obligations under the Universal Declaration of Human Rights, to stop the blatant abuse of freedom of religion and belief, to guarantee to the arrested Shincheonji leaders the right to a fair trial, and to end the detention of the 89-year-old leader of Shincheonji, both for reasons of justice and for obvious humanitarian reasons.