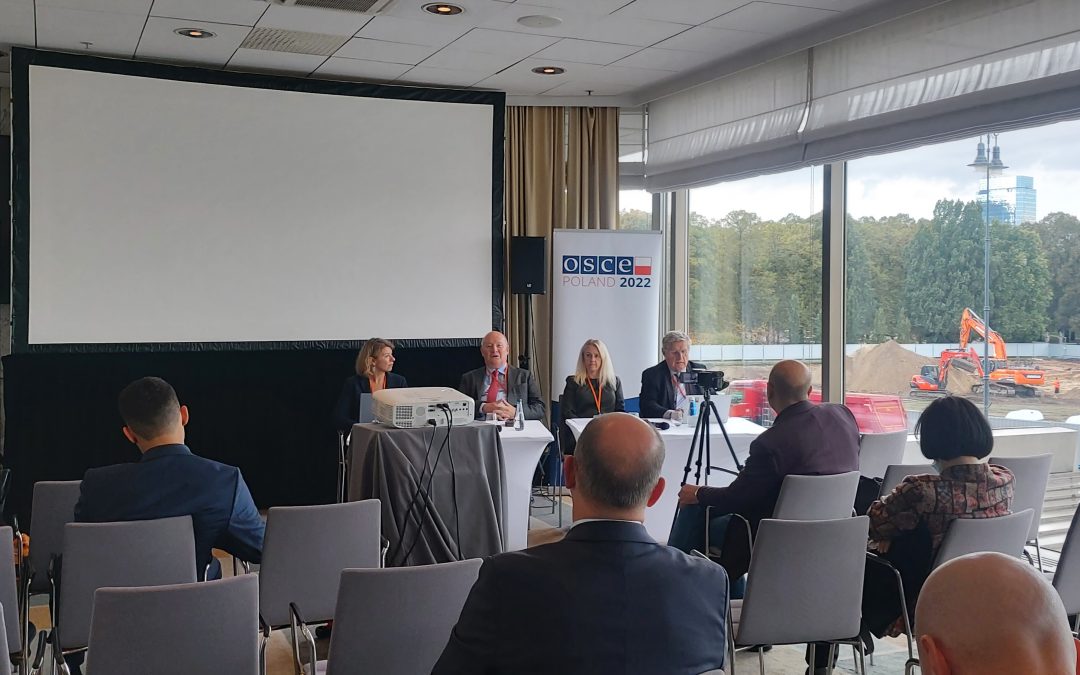 The Anti-Cult Ideology and FECRIS: Dangers for Religious Freedom 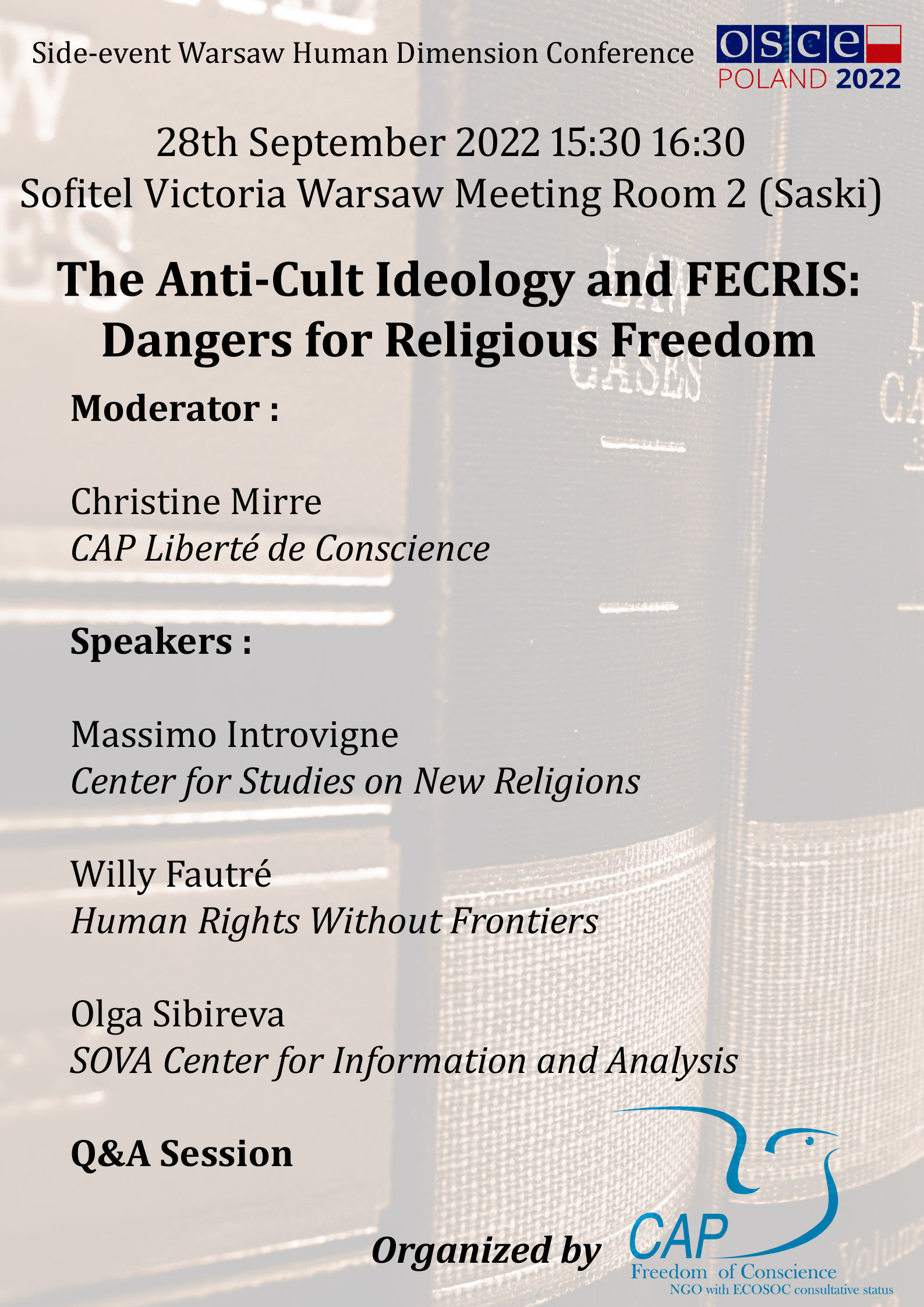 CAP Liberté de Conscience is concerned about the resumption of the fight against religious minorities in France since the recent reorganization of MIVILUDES (the Interministerial Mission of Vigilance and Fight Against Cultic Deviances) has been implemented.

At this time, the Prime Minister said that the work of MIVILUDES would be reoriented towards the fight against radicalism and would be attached to the Interior Ministry.

Finally, following the advice of the Cour des Comptes, the MIVILUDES was moved from beneath the Prime Minister office, to become a section of the Ministry of Interior.

The Minister Delegate for Citizenship at the Ministry of the Interior, Marlène Schiappa, then announced that she was in charge of MIVILUDES. On April 6, she stated that the MIVILUDES was going to be revivedand she had decided to increase its present budget ten-fold, to 1 million euro per year, and that this million will be allocated to initiatives that would be run by anti-cult associations, namely CCMM and UNADFI[1].

CCMM and UNADFI are to French associations, which pretend to be NGOs while in fact they are GONGOs (Government Non-Government Organisations), being 90% funded by the French government. Both groups have been integrated in the newly appointed Orientation Committee of the MIVILUDES. Their main activity is to make derogatory comments (under the guise of ‘information’) against religious minorities and spread propaganda aimed at discrediting and cast shame at such minorities.

CCMM and UNADFI are both part of the FECRIS (European Federation of Centres of Research and Information on Cults and Sects), a European umbrella association. In fact, UNADFI is the main co- founder of the FECRIS, the latter being registered in France and also directly funded by the French government.

FECRIS, its affiliated organizations and their leaders, have been convicted multiple times by various courts. The former vice-president of FECRIS and Board Member of Austrian FECRIS group GSK has been convicted for defamation a number of times against the religious group Norweger (Christian group present in over 60 countries). Other examples include:

AIS/PRO Juventud – Spanish FECRIS group, used the technique of “deprogramming” (a technique that usually involves kidnapping an individual, keeping that individual against his or her will whilst enforcing the person to listen to negative statements about their group until the person changes their mind). In 1999, in a judgement issued by the European Court of Human Rights (case Nr 37680/97, Ribera Blume and others versus Spain concerning a deprogramming case) the court stated that the group AIS/Pro Juventud had a “direct and immediate responsibility for … the applicants … loss of liberty.”

In 1990, two members of SADK – a Swiss FECRIS member group sentenced to prison in connection with a violent deprogramming attempt on a member of the Hare Krishna movement. Mr. Rossi, who at the time was the spokesman for SADK spoke out loudly in favour of the deprogramming, in which the victim had been subdued with tear gas, saying “We support and approve the deed.”

In a final judgement on 19th December 2001 by the Munich State Court, the founder of Sect-info Essen – German FECRIS group was ordered to stop telling or spreading a wide variety of falsehoods about Takar Singh (an Eastern religious group) otherwise they would be fined up to 500,000 DM and if not paid, would be sentenced to jail for up to 6 months.

UNADFI and its members (ADFIs) also had their share of convictions.

On 15 January 1997, the Douai Court of Appeal convicted the president of ADFI Nord, for defamation regarding the Cultural Association of the Jehovah’s Witnesses in France.

On 29 March 2002, the Marseille Criminal Court condemned a well-known member of UNADFI and FECRIS, for defamation regarding the association of Jehovah’s Witnesses.

On 20 November 2001, the Paris Criminal Court condemned the president of UNADFI, for public defamation regarding a member of the Church of Scientology. On 5 February 2003, the Paris Court of Appeal confirmed this judgment.

In November 2015, UNADFI was convicted by the Court of Appeal of Paris for “abuse of legal process”, for having joined, and persisted unlawfully and in bad faith as a plaintiff against the Church, while UNADFI knew perfectly well that this action was inadmissible, its sole purpose being to “harm the Church and to illegally influence the judicial proceedings in progress.”  This conviction was upheld by the Court of Cassation on January 12, 2017.

Moreover in 2020, FECRIS has been described by USCIRF (United States Commission on International Religious Freedom), a bipartisan U.S. federal government commission created by the 1998 International Religious Freedom Act, as a group regularly spreading negative propaganda about religious minorities that needed to be countered. In a very well documented report named The Anti-cult Movement and Religious Regulation in Russia and the Former Soviet Union,[2] USCIRF also described how Alexander Dvorkin, a Russian Orthodox anticult activist and Vice-President of the FECRIS, supported, amongst other things, “rehabilitation centres that claim to successfully deprogramme ‘victims’ through a combination of psychological, theological, and pedagogical methodologies.” Such “victims” are in fact members of religious minorities considered as “destructive” “pseudo-religions.”

In its report, USCIRF wrote that, “the anti-cult movement continues to conduct a highly effective disinformation campaign against religious minorities with devastating consequences for their human rights (…) The anti-cult movement is fundamentally a propaganda outlet conducting a highly effective information war against religious minorities throughout Russia and many of the countries in which it retains influence.”

It finally recommends to, “counter propaganda against new religious movements by the European Federation of Research and Information Centers on Sectarianism (FECRIS) (…) with information about the ongoing involvement of individuals and entities within the anti-cult movement in the suppression of religious freedom.”

On March 27, 1992, the Federal Supreme Administrative Court of Germany found that for a government agency to fund a private association, which was used by the State in order to warn the general public against the activities of certain religious or philosophical movements, was a violation of its constitutional obligation for neutrality, as well as an infringement of the plaintiff’ rights – a new religious and philosophical movement.[3] Such a decision should inform the French government when it comes to funding associations that have been engaged in religious discrimination and the spreading of malicious propaganda for decades.