Reflection on the hate speech in the contemporary society 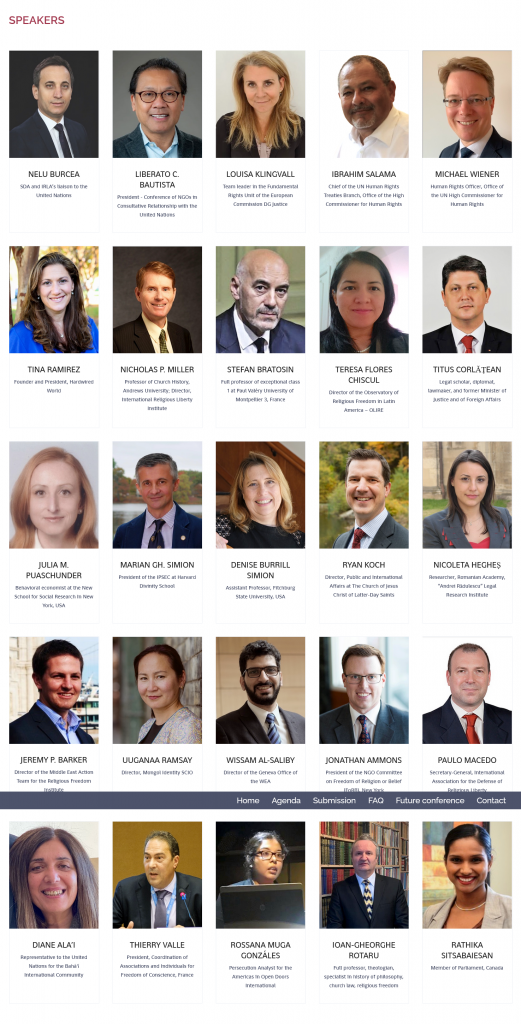 CAP Liberté de Conscience is a French NGO, granted of the Consultative Status of the United Nations, and has been dedicated since 1995 to the promotion and defense of the universal principles of freedom of conscience, religion or belief, as defined and guaranteed by the various national, European and international legal texts, whatever the category of persons to whom these principles apply and whatever their convictions.

We propose legislative reforms, administrative measures, or any other public action in favor of human rights, both at the level of States and European and international institutions, in order to ensure the equality of citizens and to fight against discrimination, in particular with regard to religious movements and trends of thought whose freedom of conscience, religion or belief are threatened or insufficiently guaranteed.

CAP Liberté de Conscience is a secular organization that relies on international treaties and declarations to defend religious communities.

There is no universal definition of hate speech in international human rights law. The concept is still widely contested, particularly in relation to freedom of opinion and expression, non-discrimination, and equality.

The Council of Europe and the United Nations agree that :

1) there is no definition of hate speech and

2) “Hate speech” means offensive speech directed against a group or individual on the basis of intrinsic characteristics such as race, religion or gender that may threaten social peace.

It is this second definition that we use to highlight the different sources of hate speech.

A particular type of discriminatory discourse that has evolved over time into hate speech was at the origin of the creation of our NGO, that coming from state institutions and in our case, we have had to defend members of religious communities who were victims of discrimination from the French state in particular.

Since 1995, France has been following a policy that is unique in Europe and internationally, except for China and Russia, against religious minorities which it qualified as sects until the beginning of the 2000 and which it now qualifies as “sectarian drift” that can undermine laicity and the well-being of French citizens.

The French government has instituted a system of surveillance of these minorities that leads to serious breaches by the State of the principles of freedom of religion or belief, equality of French citizens before national institutions and fraternity by dividing citizens according to whether or not they belong to a recognized religious or belief minority and by creating a climate of suspicion and sometimes even hatred for non-traditional and non-normative beliefs.

In France, there is a judicial system specifically adapted for members of these minorities.

This system is articulated as follows:

– The French government finances more than 80% of the associations involved in the combat against sectarian drift, which have often been condemned in court for abuse of their prerogatives and which contribute greatly to the demonization of minority spiritual movements.

– creation of an interministerial mission of vigilance and combat against sectarian drift (MIVILUDES), now attached to the Ministry of the Interior;

– training in sectarian drift provided since 1998 to students at the National School of the Magistracy by representatives of anti-sect associations, who teach on a partisan and incriminating basis, which has the consequence of obscuring the objectivity of future magistrates and influencing their personal conviction in their future cases.

This system, discriminatory in essence, has tipped over into stigmatization and amalgamation: religious minorities represent a danger because they are in the minority and this has been conveyed by the media’s bludgeoning of clichés and hateful speeches relayed by the French political class, which has resulted in a veritable witches’ hunt.

From that very moment, a climate of suspicion and hatred towards non-traditional beliefs was created in France and we witnessed a wave of violence: places of worship were vandalized, death threats were made against members of some minorities, a bomb was put in front of a place of worship, people were placed in pre-trial detention after being reported to the Miviludes, etc…

Despite the numerous alerts from the targeted religious communities, in spite of numerous reports from international authorities and civil society, the French state remains on its position in the name of laicity.

I will now address another emblematic case of hate speech propagated by state institutions, the one of the Ahmadiyya community, which has been persecuted by the Pakistani state for over 30 years.

The Ahmadiyya Muslim community has a long history of persecution and abuse by various governments and organizations. Its members are regularly killed in the most barbaric manner, deprived of their basic rights, and subjected to vicious propaganda campaigns in several countries. Pakistan is perhaps the only signatory to the International Convention on Civil and Political Rights (ICCPR) which, despite having the means to protect and safeguard the human rights of its citizens, has not only failed to fulfill its obligations, but has become an instrument for usurping the rights of the Ahmadiyya community.

The question is: What is the reason for the definition of a Muslim in the country’s fundamental document?

The answer is very simple. The state was not prepared to accept the right of Ahmadis to define their own identity and assert that they are Muslims. Through this constitutional provision, which was incorporated into the Constitution, the Pakistani legislature in effect endorsed and encouraged the prevailing religious hatred in society against Ahmadis.

France and Pakistan are signatories to international treaties including the ICCPR which oblige them to respect the Freedom of Religion or Belief.

Yet once again, despite repeated warnings from the international community, such as on June 13, 2021, when three UN special rapporteurs demanded that the persecution of the Ahmadiyya cease, or as in 2006 when Ms. Asma Jahengir, then UN Special Rapporteur on Freedom of Religion or Belief, asked France to review its policy towards religious minorities.

Hate speech fuels discrimination, as in France, and fuels persecution as in Pakistan, through the implementation of laws targeting members of a religious group and making them second-class citizens.

Hate speech is not the exclusive domain of states; religious leaders can also sometimes, in the name of their faith or the anteriority of their religion, use hate speech to eliminate other religious groups or incite their own members to hatred and intolerance against another country.

The current example of the misuse of the Russian Orthodox religion by its leader to serve ideological and patriotic aims is unfortunately emblematic of the fact that hate speech can lead to violence and war.

Patriarch Kirill of the Russian Orthodox Church together with his affiliates has been conducting for years a campaign of religious purification in Russia aimed at eliminating from the Russian territory any religion considered as a competitor and for this he is helped by associations known for their systematic use of hate speech and incitement to violence against non-traditional religions.

One of the emblematic representatives of these associations is Alexander Dvorkin, who heads a Moscow-based research center for the study of sects named Saint Ireneus.

Alexander Dvorkin in addition to having the official support of Patriarch Kirill to conduct hate speech against all religions is also the vice-president of a French association of fight against sects FECRIS (European Federation of Centres of Research and Information on Cults and Sects).

The general atmosphere created by the hate speeches of the Russian association of Mr. Dvorkin, relayed by the media and supported by the law on extremism misused to ban minority religious groups have inevitably led to violence against people (insults, threats, or physical attacks) violence against buildings (vandalism, attacks against places of worship, property and goods of members, criminal arsons …)

Since the invasion of Ukraine, it is Patriarch Kirill with the help of these same associations that have led a propaganda campaign against the Ukrainian people or by spreading hate speeches and fake news as we all have heard about, such as the one stating that the US and Ukraine are using Satanists to destroy the entire Orthodox world, or that Jehovah’s Witnesses are preparing an anti-Putin coup, or that the US and Ukraine are planning to destroy the world, that Ukrainians are Nazis, Satanists and cannibals etc.

From the very beginning of the conflict, Patriarch Kirill presented the special operation in Ukraine, not to say the taboo word “war”, as a metaphysical struggle between good and evil. His words have also taken up apocalyptic motives propagated by some streams of the Russian Church, especially those linked to the army and the security forces, the Siloviki.

Here we are faced with hate speech propagated and legitimized by the religious leaders themselves, since the year 2000, which has led, as we have seen above, to threats, vandalism, aggressions, the closure and destruction of places of worship, the banishment, the arrest or the imprisonment of members of religions qualified as extremist and banned in Russia.

For years CAP Liberté de Conscience has been denouncing to international bodies the tragic consequences of the hateful propaganda against other religions in Russia.

Recently, during the 50th session of the Human Rights Council we made a statement in support of the initiative of the NGO Human Rights Without Frontiers:

“CAP Liberté de Conscience joins Human Rights Without Frontiers in documenting for the International Criminal Court the grave responsibility of Patriarch Kirill of Moscow and all of Russia in the initiation and extension of Russia’s war against Ukraine.

CAP calls on the United Nations to collaborate with the ICC, which is currently engaged in proving war crimes and crimes against humanity committed in Ukraine and in identifying the perpetrators who will be held accountable. […]

In addition, on April 7, 2022, the European Parliament passed a resolution condemning the role of Patriarch Kirill in providing theological cover for Russia’s aggression against Ukraine.”

I also quickly mention the Ahmadiyya in Pakistan who are also persecuted because of the hate speech propagated through the sermons of the preachers of the majority religion.

I would like to complete with the case of the spreading of hate speech by the media and the tragic consequences that this generates with the recent example of the media persecution in Japan of the Unification Church following the assassination of former Prime Minister Abe.

It is here unquestionably the media that are at the origin of the hate campaign against the Unification Church.

This hateful press campaign led to cases of violence and discrimination against Unification Church members.

The Japanese media has given their followers the opportunity to publish comments on this case and some have published death threats that have not been censored. Once spread in the media or on the Internet the consequences are out of control.

We have received reports of members of the Unification Church in Japan who have been insulted in the street, humiliated at work, abused at school, fired from their jobs, and even faced divorce proceedings, suffered domestic violence, etc.

Hate speech, whatever its source, form, and purpose, must be combated at all levels: state, religion, media, etc.

Initiatives taken to combat it and to inform about its harmful and devastating consequences, such as the OSCE’s ODIHR with its annual Hate Crime Data report and the organization of this conference, should be supported and expanded.

In conclusion, I would like to mention that the UN International Covenant on Civil and Political Rights Article 20 stipulates that “any advocacy of national, racial or religious hatred that constitutes incitement to discrimination, hostility or violence shall be prohibited by law”.

Russian Federation :
RC 50 Oral statement at the UN for prosecution of Patriarch Kirill