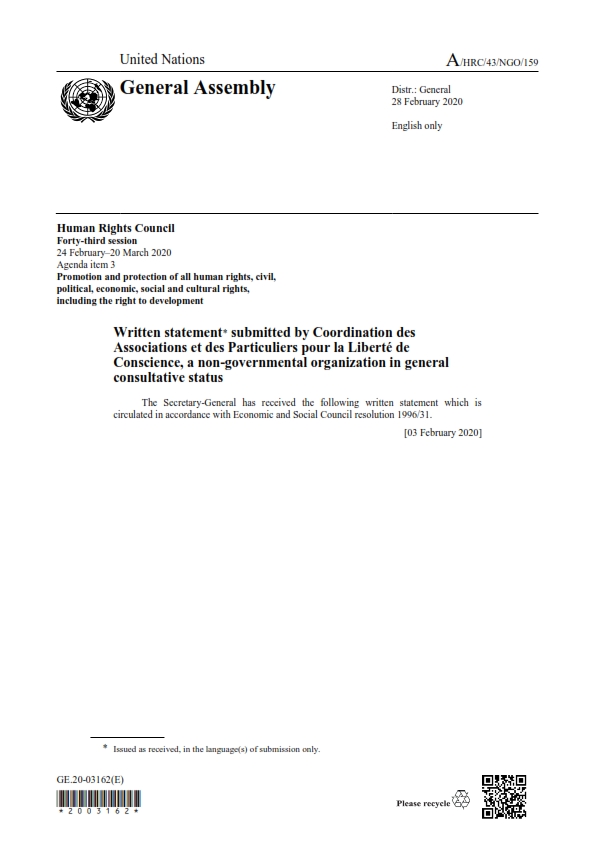 Except for Sinja mountain, all settlements came under the control of ISIS(Islamic State). All property of the people was plundered. Their houses were burned, demolished, rendered uninhabitable. Our 68 religious domes in Sinjar, almost all of them were detonated and...

A SUMMARY OF VITAL PRINCIPLES Freedom of Conscience: Tensions between Church, State and Religious Minorities in Family Issues

Vital information on human rights standards provided for the Salles report on ‘Sectarian Influence on Minors’
On 23 April 2013, Mr. Pieter Omtzigt (Netherland, member of PACE, EPP) co-sponsored an event with Lord Dundee (UK, member of PACE, EDG). The European Interreligious Forum for Religious Forum (EIFRF) helped to organise the event during the Plenary Session of the Parliamentary Assembly of the Council of Europe (PACE). The main reason for the meeting was to provide information crucial to the discussion of a report in progress on “Sectarian Influence on Minors”, with Mr. Rudy Salles as rapporteur (France, member of the PACE). Mr. Salles, whilst invited to participate, was not able to attend.

Mr. Omtzigt, as the moderator, introduced the panelists by explaining that religious freedom issues were of significant concern in many countries of Europe. He spoke of the unfortunate developments in Hungary with regards to their recent law on the registration of religious groups and also his own country Netherlands, where there were religious tensions. He pointed out that whilst some approaches enabled religious communities to integrate and work together, others had proven to be unworkable. In this last category he identified the widely criticized French approach of isolating and targeting minority religious and made the point that it would not be advisable to export this to other European countries.
The attendees were told that this meeting was to be an open debate and they were free to discuss any points during the meeting. Mr. Omtzigt then gave the floor to Professor Marco Ventura (K.U. Leuven).